The week of March 28-April 3 takes us from lunar Day 20 through Day 25. Moon watchers will have to be early morning observers this week as the Moon will not be high enough to view profitably on Monday until about 3:00 AM.

This week we will highlight Serpentine Ridge. 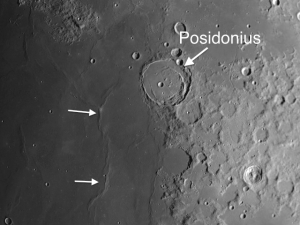 Serpentine Ridge: [NE/G12] On March 28th, in the eastern part of the Sea of Serenity, you will find the Moon’s best example of a wrinkle ridge. Like breaking waves that sometimes indicate reefs lying just under the surface of the water, wrinkle ridges often signal the presence of subsurface structures on the Moon. 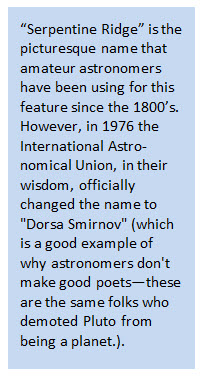 Serpentine Ridge reveals the ghostly outlines of an underlying mountain range that formed the inner ring of the Serenity basin. At the highest point of this ridge, just west of the crater Posidonius where it looks like the ridge splits into a “Y,” there is a tiny 1.2-mi. crater that will test both your optics and the seeing conditions.

OF ADDITIONAL INTEREST TO MOON WATCHERS ON LUNAR DAYS 20-25:

On Monday, Tuesday, and Wednesday morning, Saturn and Mars will be in the close neighborhood of the Moon. Saturn’s rings will be splendid and you should have no trouble seeing four of its moons. Mars will be at magnitude -0.5 and will have grown to an apparent size of 11.7 arc-seconds on its way to opposition on May 22nd.

Jupiter will be visible all week starting in the evening twilight. On Tues. morning there will be a double transit of Io and Europa across the face of Jupiter. Io will begin its transit at 1:42 AM EDT followed by Europa at 2:01 AM. They are difficult to spot, but look for them against the north equatorial belt. The Great Red Spot will appear just before them on the south equatorial belt.

Much easier to see is Io’s shadow which will appear as a clean black dot against Jupiter’s north equatorial belt at 2:10 AM EDT, followed by Europa’s shadow at 3:00 AM. (These are essentially solar eclipses on Jupiter!)

As you watch Europa approach Jupiter, consider that you are looking at one of the most likely places in the Solar System where we will find evidence of extraterrestrial life (albeit pretty small). Europa is covered with oceans of water that are 90 miles deep! (Compare our deepest oceans which are only five miles deep.) Only the top mile or so is solid ice, the rest is liquid H2O because of the many undersea volcanoes, The combination of water + energy leads to the exciting possibility of at least microbial life having formed in Europa’s oceans! We should know one way or the other in the next few years.

If you haven’t downloaded the SkySafari app from iTunes yet, now is a good time to do so. Set it up for March 29th for whatever time corresponds to 1:42 AM EDT in your zone, do a search for Jupiter, click on “center,” then zoom in until Jupiter almost fills the screen. The detail is astonishing! Not only can you clearly see the cloud bands with their munutia of details, if you click on “Time”, choose “minutes” and put it on fast forward, you can observe all four transits move across Jupiter’s face on your iPhone screen!