The week of December 13-19 takes us from Day 10 to Day 16. This week we will highlight Sinus Iridum, located in the northwest sector of Mare Imbrium.

Sinus Iridum: [NW/E6] Sinus Iridum (the Bay of Rainbows) formed after the Imbrium impact but before the lava flooding that filled the Imbrium basin. This bay is itself an enormous 160-mile crater and is the largest and most spectacular example of subsidence on the Moon. If you have very sharp eyes, without optical aid you should be able to see the “bite” that Iridum takes out of Mare Imbrium.

When the Sun is at a low angle (which will be the case early Tuesday night), you can see that Sinus Iridum is covered with wrinkle ridges, resembling many waves lapping toward the shore. 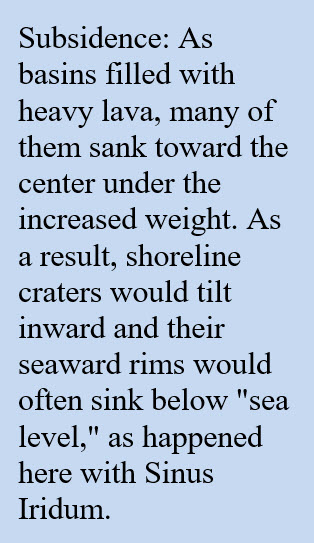 Pay close attention to Promontorium Heraclides. Under the right lighting conditions you can see the profile of a woman’s head with long flowing hair as she gazes wistfully out into the bay. Those who have gotten to know her refer to her fondly as the Moon Maiden. Cassini himself was the first person to describe this feature. She reveals herself best when the seeing is a bit “soft” and the terminator has just cleared the western edge of the Jura Mountains. At this time, you will see her gazing across the bay to Promontorium Laplace, her hair streaming out behind her. If the seeing is crisp, try defocusing a little.

The Geminid meteors will appear December 13-14. It is the year’s best meteor shower! The shower peaks on Monday night/Tuesday morning December 13–14 with up to 120 meteors per hour visible from a perfectly dark location. Observing from a semi-rural sky you will typically see about half that number. Most arrive singly, but sometimes two or three zip by in succession.

A massive planet 10 times bigger than Jupiter has been discovered orbiting a pair of giant stars in Centaurus. The planet has been dubbed “b Centauri” and is 325 light years away.