The week of December 20-26 takes us from Day 17 to Day 21. This week we will highlight the crater Proclus located in the NE quadrant of the Field Map at H14, the Ursid meteor shower, and the Winter Solstice. 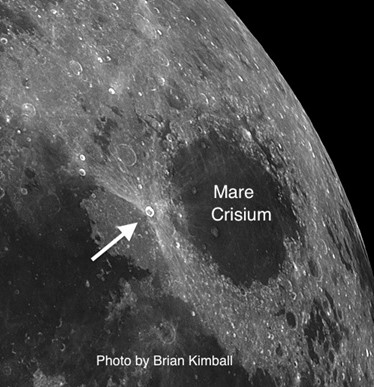 Proclus: [NE/H14] [NE/H14] Proclus is a small crater located just west of Mare Crisium. In spite of its size it is one of the brightest spots on the Moon. When you view it around full Moon you will notice it also has a system of rays that delicately fan out in a telltale butterfly-wing pattern, which tells you a lot about the flight path of the incoming projectile. Proclus is one of the best examples of what happens during a low-angle impact.

1) The Ursid meteor shower peaks after midnight on Tuesday, December 21st. It’s a low volume “shower” with only about 10 meteors per hour.

2) The Winter Solstice will occur on Tuesday, December 21st. It is the shortest day of the year in the Northern Hemisphere, and, historically, is a day of great importance. Ancient peoples recognized that if the movement of the Sun towards the south did not cease and reverse itself, they would be doomed, so one of the most important functions of the chief priests of ancient cultures was to predict when the solstice would happen, and it was a day of great celebration. In one pagan culture, early Roman Catholic priests were astonished to learn that centuries before the birth of Jesus, the chief priest would emerge on the day of the solstice and announce, “The Virgin hath brought forth, let us rejoice!” They were referring to the virgin of the skies bringing forth a new born sun, not the Virgin Mary, but the Roman Catholic priests were understandably perplexed. One interesting spin on this announcement was, “The devil hath quite surpassed himself in that he hath reversed the normal sequence of events.”