The week of February 1-7 takes us from Lunar Day 20 to 26. This week we will highlight Serpentine Ridge. 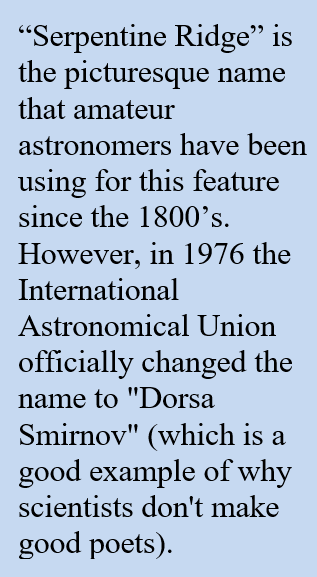 Serpentine Ridge: [NE/G12] in the Sea of Serenity, west of the crater Posidonius, you will find the Moon’s best example of a wrinkle ridge1. Like breaking waves that sometimes indicate reefs lying just under the surface of the water, wrinkle ridges often signal the presence of subsurface structures on the Moon. Serpentine Ridge reveals the ghostly outlines of an underlying mountain range that formed the inner ring of the Serenity basin. At the highest point of this ridge, just west of Posidonius where it looks like the ridge splits into a “Y,” there is a tiny 1.2-mi. crater that will test both your optics and the seeing conditions.

On February 1, 2003, the space shuttle Columbia breaks up on re-entry over Texas, killing the crew. On February 3, 1966, Luna 9, launched by the Soviet Union, becomes the first spacecraft to soft land on the Moon.

1Wrinkle Ridges: Low ridge-like features on the maria which can be seen only at lunar sunrise or sunset. Although the official term is dorsa, they are more popularly known as wrinkle ridges.