The week of February 22-28 we will highlight Schröter’s Valley, visible Tuesday night. 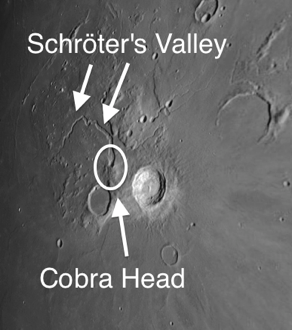 Schröter’s Valley/Cobra Head: [NW/G5-4] Schröter’s Valley is the Moon’s most impressive sinuous rille and was created when a monstrous lava tube collapsed. It begins at a volcano that is popularly known as “the Cobra Head” and then meanders for 100 miles toward Oceanus Procellarum. For most of its length it varies between three and six miles wide and is up to 3,000 feet deep. It is estimated that at the peak of its activity an incredible 10 million tons of lava per second flowed through Schröter’s Valley! At the end of its 100-mile journey the lava dramatically cascaded over a 3000-foot-high cliff into Oceanus Procellarum, which it then filled to a depth of 600 feet!