The week of May 4-10 takes us from Lunar Day 12 to Day 19. This week we will highlight the Sirsalis Rilles and the crater Galilaie, viewable on Tuesday evening. 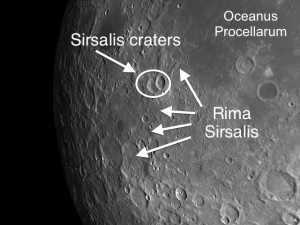 Rimae Sirsalis: [SW/L3-4] Just in from the southwest shore of Oceanus Procellarum you will see two small overlapping craters, Sirsalis and Sirsalis A (by now you should be able to tell immediately which crater is older). Neighboring these two craters to the east and south is a complex of rilles. Rima Sirsalis is the most conspicuous, but it has lots of neighboring offshoots. How many can you see? 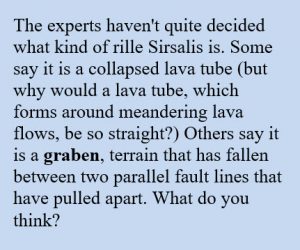 Rima Sirsalis is a gift to amateur astronomers because it can be easily seen in the smallest of telescopes. At 240 miles long and two miles wide, it is one of the longest rilles on the Moon, and it reveals itself just before full Moon, a time when most astronomers are putting their telescopes away!

Galilaei1: [NW/H3; L=63°W] While you’re in the neighborhood, pay your respects to the insignificant little crater Galilaei, about 250 miles north (about 3.5 arc-minutes) and reflect upon why the man who opened our eyes to the true nature of the Moon had such an inconsequential feature named after him.

The Eta Aquarid meteor shower peaks on Monday night. Look to the southeast after midnight. On May 5, 1961, Alan Shepard, first U.S. astronaut, was launched into a suborbital mission.

1 Galilaei, Galileo: (1564-1642) Italian scientist, philosopher, mathematician and astronomer who was dubbed the “Father of Modern Science” by Albert Einstein because, unbelievably, he was the first person who actually thought it was important to conduct experiments to prove his theories!

Galileo first pointed his telescope towards the heavens in 1609 and revolutionized astronomy with his discoveries that Jupiter had moons (proving that the Earth was not the center of all movement), that Venus went through phases (proving that it orbited the Sun, not the Earth), and that the Milky Way glowed from the light of millions of stars that were so distant they could not be discerned by the naked eye. His discovery of spots on the Sun and craters on the Moon meant that these heavenly bodies were not “perfect and unblemished”–a belief that was propounded by Aristotle and insisted on by the Church. (One authority, in a classic case of spin-doctoring, went so far as to declare that the Moon was encased in an invisible crystalline shield, which preserved its perfectly smooth and unblemished integrity.

The Jesuit priest Giovanni Riccioli named most of the feature on the Moon, and it is perhaps indicative of his own sense of self-importance that the crater Riccioli is larger than the craters Copernicus, Kepler, and Tycho.

Rima Sirsalis: The Most Conspicuous Rille on the Moon
Tagged on: craters on the moon    objects on the moon