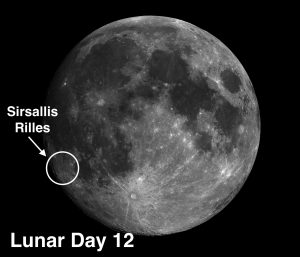 The week of November 19- 25 takes us from the end of Day 11 through Day 17. This week we will highlight the Sirsalis rilles, viewable on Tuesday evening.

Rimae Sirsalis: [SW/L3-4] Just in from the southwest shore of Oceanus Procellarum you will see two small overlapping craters, Sirsalis and Sirsalis A (by now you should be able to tell immediately which crater is older). Neighboring these two craters to the east and south is a complex of rilles. Rima Sirsalis is the most conspicuous, but it has lots of neighboring offshoots. How many can you see? 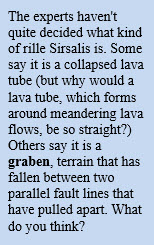 Rima Sirsalis is a gift to amateur astronomers because it can be easily seen in the smallest of telescopes. At 240 miles long and two miles wide, it is one of the longest rilles on the Moon, and it reveals itself just before full moon–a time when most astronomers are putting their telescopes away!

Rima Sirsalis is unusual not only because of its great length, but because it cuts straight through a highland region and is rarely persuaded to deviate from its course. On its southern end, the rille begins just east of the crater Darwin, then proceeds north where it “empties” into Oceanus Procellarum. Spend a lot of time here. Draw the network of rilles and keep coming back to improve on what you saw.

Latest posts by Andrew Planck (see all)
Rima Sirsalis is a Gift to Amateur Astronomers
Tagged on: lunar dates    lunar days    objects on the moon