The week of August 15-21 takes us from Lunar Day 19 to Day 24. This week we will highlight the moon crater Piccolomini and the Altai Scarp, viewable early Tuesday morning. 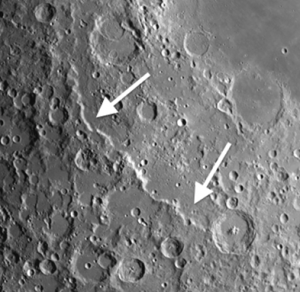 Altai Scarp (Rupes Altai): [SE/M12] Viewable even through small telescopes, the Altai Scarp is a spectacular example of how shock waves from a major impact can compress the surrounding terrain into a series of outwardly expanding rings. Nearly 3.9 billion years ago a large asteroid or comet slammed into the Moon and dug out the Nectaris Basin. Shock waves rapidly expanded through the surrounding terrain and became frozen in place, producing a classic multi-ring basin. Rupes Altai is a beautiful and conspicuous fragment of the original rings. In truth, it is a circular mountain range whose highest peaks rise to 13,000 feet! But you must catch the scarp under a low Sun, it’s majesty fades quickly. View it Friday evening, then revisit the area around Day 5 at lunar sunrise when the face of the scarp is fully illuminated. Which day, do you think, shows the scarp to its best advantage?

Piccolomini: [SE/M13] The Altai Scarp terminates on its southern end at Piccolomini (55 mi. in diameter.), a beautiful and complex crater with a substantial central mountain peak, terraces, and a smooth convex floor. Notice how there is a great deal more turmoil around the southern rim of Piccolomini. Can you see the tiny craterlet just touching the northwest base of the central mountain?

ADDITIONAL INTEREST IN SPACE FROM AUGUST 15-21: