The week of August 8-14 takes us from Lunar Day 11 to Day 18. This week we will highlight the moon craters Taruntius and Gutenberg, viewable on Sunday evening.

Taruntius: [NE/J14; L=47°E] Located on the north shore of Fertility, Taruntius is a wonderful example of a floor-fractured crater (FFC). Take a close look at it. Once you are familiar with the appearance of “normal” craters you will notice right away that Taruntius has an unusually shallow basin. This is because hot magma underneath pushed upward with such force that the entire floor rose a little over a mile to its present level!

Also notice the surrounding material that was ejected from the impact (the secondary craters) and the small crater Cameron that resulted from an object that hit precisely on the northwest rim. (Although Cameron looks small, it is nearly seven times larger than Meteor Crater in Arizona!) Cameron is a simple crater. Can you tell if it is bowl-shaped or does it have a flat floor? (In order to tell, you have to be observing when the rim shadow is crossing the floor.) 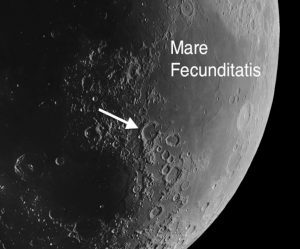 Gutenberg1 : [SE/K14; L=41°E] While you’re in the area, drop by and pay your respects to one of history’s great men. Gutenberg crater is not only of historical importance because of its namesake, it shows an unusual sequence of crater development. Gutenberg is a large crater (45 mi. in diameter) that is intruded upon by a smaller crater (12 mi. in diameter–Gutenberg E) on its eastern wall. So far so good. But take a close look at the crater immediately adjoining to the south (Gutenberg C). These craters have violated the usually dependable rule that newer craters are smaller than the older craters they have intruded upon. Gutenberg C is the older crater, while the larger Gutenberg is the interloper.

Another item of interest is the simple crater on the southwest rim (Gutenberg A). Simple craters start with rounded floors then progress to a flat floor resulting from a cascade of boulders that have rolled down the interior walls and settled at the bottom. Rim shadows on bowl-shaped floors will appear as a smooth arc. If the floor is flat because it has been partially filled in, the shadow will be truncated (i.e., the apex will be squared off.

1 Gutenberg, Johannes (1398-1468): Gutenberg invented the printing press around 1450 and revolutionized the world. Before Gutenberg it would take a single monk 20 years to copy the Bible, and there were only 30,000 handwritten Bibles in the entire world. Fifty years after Gutenberg there were more than 10 million Bibles in print!