The week of Dec. 26-Jan.1 takes us from Lunar Day 27 to Day 3 when the Moon will be just 3.5° away from Venus and you should be able to see both objects in your binoculars. Even with your naked eyes, this will be a lovely site with the Moon and Venus in deep twilight and the Moon’s dark side glowing from earthshine (also known as the old Moon in the New Moon’s arms). The Earth will be reflecting sunlight from its daytime portion onto the Moon’s dark side, which is then reflected back to us.

This week we will highlight the crater Endymion, visible on Sunday. 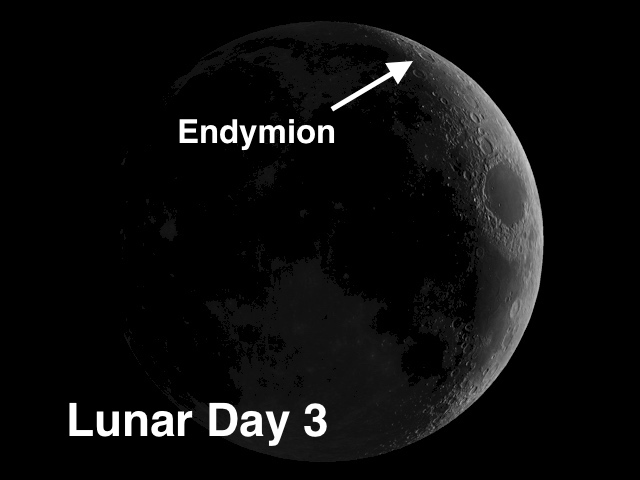 Endymion: [NE/D15] This is an older crater which somewhat resembles Plato [Day 8; NW/D9] in that it has a smooth, dark-chocolate floor and three-mile-high walls which cast lovely shadow spires on the flood plain below when the Sun is low. And there is an extra treat: 15 miles south-west of Endymion (about 13 arc-seconds) you might be able to spot a beautiful little concentric crater1.

OF ADDITIONAL INTEREST FROM LUNAR DAY 27 TO DAY 3

Sirius, the alpha star in Canis Major, rises in the east around 7:30 local time (±30 minutes, depending on your location). Check it out with your binoculars when it is low on the horizon. It frequently will put on quite a fireworks display of different colors as its light is violently refracted through a turbulent atmosphere.

Sirius, also known as the “Dog Star,” gives rise to the phrase “the dog days of summer.” Most people are vaguely aware that the dog days of summer are pretty warm days, and suppose that the days are so warm that even dogs are uncomfortable. But the phrase was used by the Greeks and Romans to refer to the time when Sirius would rise just before the Sun, in late July, and hence was the harbinger of the hottest days of the year.

1concentric craters: There are several craters on the Moon that have inner rings that curiously make them look a bit like donuts, they seem so perfectly cut out. For a time it was thought that these were craters that had received dead-center impacts from smaller meteorites, but that theory has now been called into doubt. In 1978 Charles Wood catalogued 51 such craters and found two important common denominators (since then 14 more have been found). All had diameters of between 1.2 and 12 miles, and most of them occurred near the edges of lunar seas. “The inner donuts,” he concluded, “cannot be impacts that just happened to be centered on preexisting craters.” (Alas, another bubble burst!) Hesiodus A [SW/M8] and Marth [SW/N7] are the Moon’s best examples of concentric craters. (Is it just a coincidence they are both located on the southern shore of Mare Nubium?)

Latest posts by Andrew Planck (see all)
The Old Moon in the New Moon’s Arms & Endymion
Tagged on: lunar dates    lunar days    objects on the moon