The week of Dec. 19-25 takes us from Lunar Day 21 to Day 26. On Monday the Moon rises shortly after 11:00 PM and on Christmas Day moonrise is nearly 4:00 AM. This time is reserved for highly dedicated Moon observers. This week we will highlight the crater Cassini. 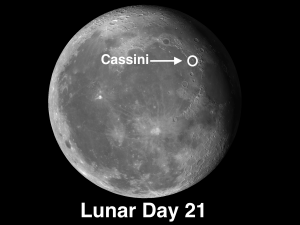 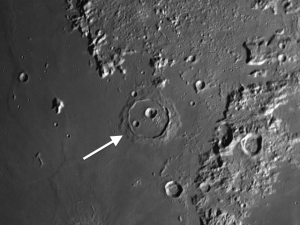 Cassini: [NE/E10] Can you tell by looking at Cassini that it was created on the Imbrium floor before the lavas started to flow? The floor of Cassini appears to be at sea level with the rest of Imbrium (this would not be possible if Cassini were created after the lava flows), and aside from a few obvious disturbances, much of it is quite smooth. Cassini’s size (35 mi.) and the width and complexity of its ramparts suggest that its basin should have substantial depth and central mountain peaks, but it is quite shallow.

Take a close look at Cassini under high magnification. The two tiny bumps (you might see three) just to the southwest of the largest internal crater give you a clue about the timing of the impact. Cassini was at one time quite deep with central mountains appropriate to its size. The post-Imbrium lavas that flooded the crater rose so high that all that is left of the once impressive central mountain peaks are these little bumps. 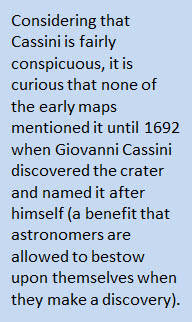 The floor of Cassini is covered with features, some of which can be easily seen with a small telescope, but others are quite delicate and require larger apertures and good seeing. Make a rough sketch of what you see and come back in two weeks, when the Sun will be coming from the opposite direction, to fill in more details. You will have no trouble with the two larger internal craters, Cassini A (9 mi.) and Cassini B (6 mi.). Can you see how Cassini A is shaped like a teardrop pointing toward the northeast? The teardrop shape was the result either of a closely spaced double impact or of an oblique impact.

Notice how Cassini’s glacis, a wreathlike outer rim that would normally extend out farther, has been partially covered by the flow of Imbrium lavas. Cassini and Archimedes (to its SW at grid #G9) share a similar history. Compare them closely to see what characteristics they share in common.

OF ADDITIONAL INTEREST FROM LUNAR DAY 21-26:

On Monday Venus is 22° above the SW horizon at 6:00 PM local time (depending on your distance from the center of your time zone). If you are new to astronomy and are not aware that Venus goes through phases like the Moon, this is a great time to start observing it. Watch it over the next three months as it wains from slightly more than half to a very thin crescent as it falls towards the Sun. (Paradoxically, Venus is brighter as a thin crescent than it is at full!) In making these observations you will be duplicating one of the greatest scientific discoveries ever made, as Galileo realized that this was absolute proof that Venus orbited the Sun, and not the Earth. If you make your “discoveries” known to others, you will be in a lot less hot water than Galileo found himself. For making public his observations that the Earth moved and was not, itself, the center of all movement, he was convicted of heresy and put under house arrest. He was forced to repudiate his beliefs during his trial by Church authorities. He can be forgiven. He was 70 years old (an extremely advanced age for that period). If he felt any inclination to resist abjuring, he was dissuaded by a visit through Rome’s torture chambers. Legend has it, however, that as Galileo left the chambers after his trial, he muttered, “Eppur si muove” (And yet, it moves.)