The week of July 27 – August 2 takes us from Lunar Day 8 to Day 14. This week we will highlight region around the Fra Mauro crater. 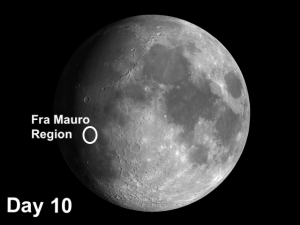 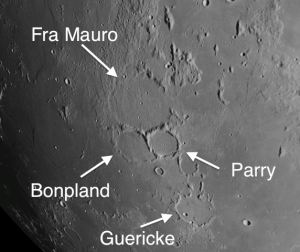 at Fra Mauro and the three craters to its south: Parry, Guericke, and Bonpland. Look for the telltale gaps and gouges that cut through their rims and point significantly back to Mare Imbrium, their place of origin. This is classic Imbrium sculpturing and is a textbook example of how you can “read” the lunar surface. Can you see the north-south linear features on Fra Mauro, Bonpland, and Parry? There is one long rille that breaches the walls of all three craters. What does this tell you about the age of these craters as they relate to Mare Imbrium? In many craters such as Alphonsus (Day 7; L9), Pitatus (Day 8; M8), and Posidonius (Day 5; F12) the rilles are clearly contained within the outer protective rims of the mountains, suggesting that they are related to the formation of the crater itself.

The Delta Aquarid meteor shower peaks on Monday night; look in the southeast after midnight.

The European Southern Observatory’s Very Large Telescope (VLT) has taken the first-ever image of a multi-planet system around a Sun-like star only 300 light years away (a comparatively small distance–our galaxy is 100,000 light years in diameter!). Once again, there is hope that we are not alone. The parent sun is the large bright spot in the upper left corner. The two planets to its lower right are gas giants like Jupiter and Saturn. (If there are also Earth-like planets around this star, a likely possibility, they will be too cool to be detected by the VLT.) 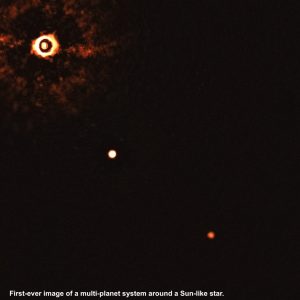