The week of November 28 – December 4 takes us from Lunar Day 6 to Day 12. This week we will highlight the moon craters Aristoteles & Julius Caesar, found in the NE quadrant of the Field Map. 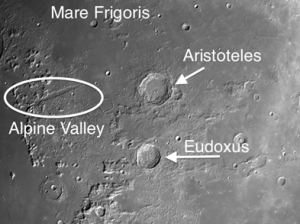 Aristoteles: [NE/D11; L=17°E] Close to the terminator this evening there is an eye-catching pair of moon craters, Aristoteles and Eudoxus. Aristoteles is a complex moon crater with terraces, but in place of a central mountain it has a couple of small off-center peaks that are poking through the lava plain on its floor. The substantial ejecta blanket to the north of Aristoteles clearly shows radial structure, and if you catch it in the early morning sunrise it will look like many points of light peeking through the shadows.

Aristoteles adjoins the moon crater Mitchell to its immediate east. The pair violates the standard rule that smaller, younger craters are superimposed on top of larger, older craters. Can you tell that the younger (and larger) Aristoteles is intruding onto Mitchell (which is older and smaller)?

Julius Caesar: [NE/J11; L=15°E] Drop down to the Sea of Tranquillity and locate the partially ruined moon crater Julius Caesar near the western shore of Tranquillitatis. The floor of this crater is unusual in that it gradually darkens as you go north until it becomes one of the darkest areas on the surface of the Moon. The lighter-hued portion of the floor (and of the surrounding area) is believed to be composed of material that was blasted out of the Imbrium basin 3.9 billion years ago. Search this region to look for features that are radial to Mare Imbrium. They are further evidence of sculpting that resulted from the creation of the Imbrium basin.

On Thursday, Jupiter will be 3° north of the Moon.