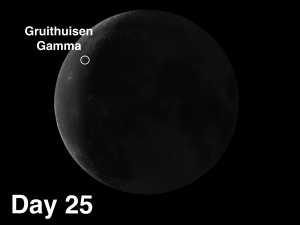 The week of December 31 – January 6 takes us from the end of Day 24 to Day 1. This week we will highlight the crater Schiller and the lunar dome Gruithuisen Gamma, viewable around 4:00 AM on Tuesday morning. 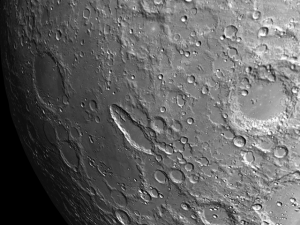 Schiller: [SW/Q6] Schiller is a curiosity. It has the appearance of an unusually elongated crater, but there is no process that could create one crater with such an extremely elongated axis; however, there is no indication on the floor of separate impacts. The current belief is that Schiller was created when a flight of three or four projectiles landed at virtually the same moment. The liquefied target zones then blended together to leave no trace of separate impacts.

Just to the southwest of Schiller, there is an unnamed basin which shows striations from lunar material that was blasted out of the Orientale basin [Day 13], located just around the southwest limb of the Moon in the L-M libration zone on your Field Map.

Gruithuisen Gamma1: [NW/F5] There is a peninsula-like piece of highland terrain that extends southwest of Sinus Iridum. At the end of this peninsula, you will find Mons Gruithuisen Gamma. Next to the so-called Valentine Dome, this is the Moon’s second largest dome. If you can manage to spot the summit crater (3,000 feet in diameter, about one-half an arc-second at the Moon’s mean distance), you will have accomplished a major feat! (This would require at least a 10″ telescope and a night of exceptionally steady viewing.)

1 Pronounced /GROOT.hoo.zen/, named after Baron von Gruithuisen, the first person to propose (more than 100 years before it was accepted) that craters were the result of meteorite impacts.