The week of July 13-19 takes us from Lunar Day 22 to Day 28. This week we will highlight the crater Copernicus, viewable around 3:00 a.m. on Tuesday and Wednesday, and the comet Neowise. 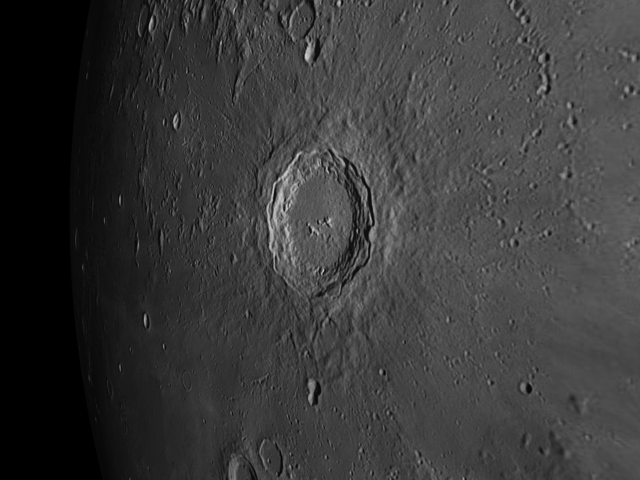 Copernicus1: [NW/J7] Magnificent Copernicus has been justifiably dubbed “The Monarch of the Moon.” The crater was blasted out 800 million years ago in an explosion that was so powerful that some of the ejected debris almost certainly rained down on the Earth. It is 58 miles in diameter and has walls that rise to an impressive 12,400 ft. above the floor. As a result, sunset over Copernicus at the beginning of Day 9 is a thing of beauty! This single crater is large enough to enclose the state of Rhode Island. In the center there is a complex of mountains that is worth studying. Some authorities say there are up to seven peaks. How many can you count?

See if you can spot the tiny crater Copernicus A (2.2 miles in diameter) on the east wall under the high rim peak. (It will be about 2 arc-seconds in diameter, so 100x or more should do the trick.)

There is a complex system of ridges radiating from Copernicus, and on the surrounding terrain between Copernicus and Eratosthenes you will find a host of secondary craters that resulted as huge boulders were blown out from the original impact and landed some distance away. These are some of the best secondaries on the Moon.

Immediately south of Copernicus is Fauth, a double crater that gives you the impression that you are peering at a keyhole.

Comet Neowise, a very nice naked eye comet, has appeared in the morning skies. From Colorado the comet is visible very low on the NNE horizon around 4:00 a.m. during the first part of the week. It might be helpful to scan with binoculars.

1Copernicus, Nicolaus: (1473-1543) Renowned Polish astronomer who took the first major step to bringing astronomy out of the dark ages. The convoluted system of cycles and epicycles that Ptolemy introduced to explain the movement of the planets was woefully inadequate. Calculations of planetary positions were always off. Copernicus realized that if he simply placed the Sun at the center of the solar system, suddenly the math worked! Astronomers could predict the positions of the planets with greater accuracy (although because he still insisted that planets must move in “perfect circles,” calculations were still a little off. It was Kepler who put things straight some 60 years later with his discovery of elliptical orbits.)

Copernicus published his findings in his book, De Revolutionibus Orbium Coelestium (On the Revolutions of the Heavenly Spheres). The book was essentially finished by 1532, but because he feared ridicule from the academic world and reprisals from the Catholic Church, he did not allow it to be published until he was on his deathbed in 1543. He was presented with a copy of the book on the very day that he died.