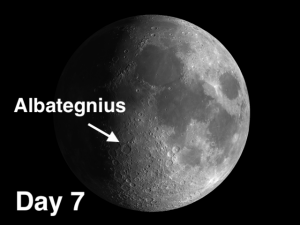 Merry Christmas everyone! The week of December 25-31 takes us from Day 7 to Day 13, very nearly full moon. This week we will highlight the crater Albategnius, viewable on Monday night (just in case you don’t know what to do with yourself on Christmas Eve). 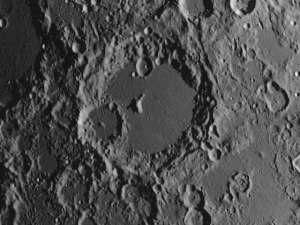 Albategnius: [SE/L10] Albategnius is a delight! It is an 85-mile complex crater located just east of the Ptolemaeus trio in the central Highlands (the trio should be just touching the terminator Monday night). Sunrise over Albategnius is a lovely sight, as the jagged peaks on the eastern rim will cast many shadow spires on the floor. This is a good place to observe the standard sequence of crater formation. Look for hints that alert you to the comparative ages of the different craters. On its southwest rim, Albategnius is overlapped by Klein (27 mi.) which in turn is intruded upon by Klein A (± 5 mi.) on its NE rim. Both Albategnius and Klein have central peaks, but notice how Albat’s central mountain seems to have been pushed off center and, astonishingly, a meteorite has landed with precise accuracy on the very tip of its highest peak, leaving a tiny craterlet as a memento! Because the craterlet is only 1 mile in diameter, it will seriously test your optics, the seeing conditions, and your experience!

Before reading the below footnote, look closely at Albategnius and see if you can spot any evidence that will tell you whether it was in place before or after Mare Crisium was formed.1

OF ADDITIONAL INTEREST IN SPACE FROM DECEMBER 25-31:

1 Immediately NE of Albategnius, touching its rim, you can see evidence of Imbrium sculpting–long grooves pointing directly back, with accusing fingers, towards Mare Imbrium, verifying that Albategnius was in place before the impact that excavated Mare Imbrium.