The week of December 18 – 24 takes us from just past New Moon to Day 6. This week we will highlight the crater Maurolycus, viewable on Sunday evening. 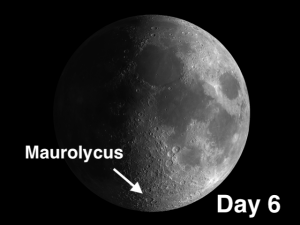 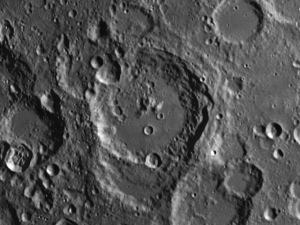 Maurolycus displays a rich diversity of different types of features. How many can you see? The central mountain peaks are so tall that they are illuminated long before the Sun finds its way to the dark floor. Also notice how Maurolycus overlaps a smaller unnamed crater on its southern border. This flies in the face of the rule that says younger craters are usually smaller than their older bretheren.

OF ADDITIONAL INTEREST IN SPACE THE WEEK OF DECEMBER 18-24:

Sirius will rise around 7:30 PM, depending on where you are. As it rises, it has been known to twinkle vividly in different colors. Use binoculars to increase the effect.

Thursday, December 21st, the Winter Solstice, is the shortest day of the year in the Northern Hemisphere, and, historically, is a day of great importance. Ancient peoples recognized that if the movement of the Sun towards the south did not cease and reverse itself, they would be doomed, so one of the most important functions of the chief priests of various cultures was to predict when the solstice would happen, and it was a day of great celebration. In one pagan culture, early Roman Catholic priests were astonished to learn that centuries before the birth of Jesus, the chief priest would emerge on the day of the solstice and announce, “The Virgin hath brought forth, let us rejoice!” They were referring, of course, to the virgin of the skies bringing forth a new-born sun, but this meaning was lost on the Roman Catholic priests who were thoroughly perplexed. One interesting spin on this announcement was, “The devil hath quite surpassed himself in that he hath reversed the normal sequence of events.”

Latest posts by Andrew Planck (see all)
Maurolycus – Largest and Most Conspicuous #MoonCrater in the Lunar Highlands
Tagged on: lunar dates    lunar days    objects on the moon    winter solstice