The week of January 31 – February 6 takes us from Day 29 to Day 6. This week we will highlight the moon craters Messier and Messier A, viewable on Friday night. 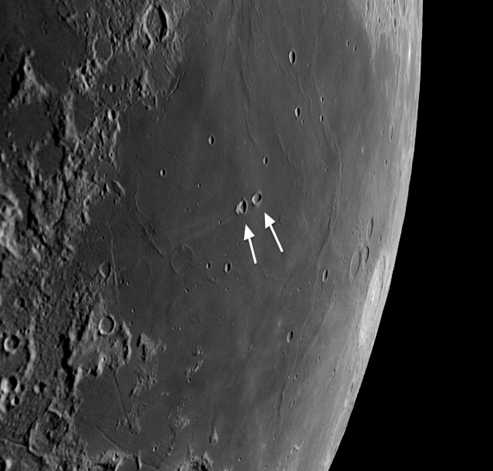 Messier1: [SE/K14] One of my favorite objects on the Moon is a small pair of craters named Messier and Messier A. They are located on the western lava plains of the Sea of Fertility and can be easily seen through the smallest telescopes. The craters have a pair of splash rays that resemble the tails of a comet (an appropriate resemblance, considering who they are named after).

These rays, which extend about 75 miles to the west, have a happy characteristic in that they are visible under lower angles of illumination. It is unusual to be able to see both a crater and the rays it produced at the same time. (Tycho [SW/P8] is the most conspicuous example of splash rays.)

So that he could avoid repeating the disappointment every time he ran across one of these items, he created a list of 110 “nuisance objects”–things to be avoided when you’re hunting comets. But because these objects happen to be the most interesting things in the sky to look at, paradoxically today’s amateur astronomers have turned vice into virtue. Observing all 110 of the items on Messier’s list is the number one goal of many fledging astronomers, and there are many who consider that you’re not a “real” astronomer until you have done so.