The week of January 24-30 takes us from Day 21 to Day 28. This week we will highlight the moon crater Plato, viewable on Monday and Tuesday nights.

Plato: [NW/D9; L=9°W] When the terminator is a little to the east of Plato, you will witness one of the Moon’s loveliest sights. At such a time, the setting Sun will be filtering through the mountain peaks and casting long spire-like shadows on Plato’s floor, and it will look like the skyline of an entire city has been outlined on the interior plains of Plato.

There are a few instances where craters are seemingly complex, such as Plato and Archimedes, but they are lacking the requisite central peaks. So what happened? The peaks are still there; they are actually 1.2 miles high, but they’ve been entirely buried by torrential lava flows! Plato’s original floor is actually 1½ miles deeper than it appears here. 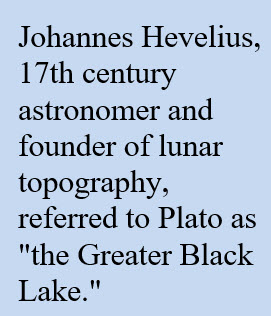 Plato’s floor also presents us with an interesting challenge: There are several tiny craterlets that will test your instrument, your powers of observation, and the atmospheric seeing. There have occasionally been unofficial contests to detect the largest number of craters on Plato’s floor. Although some amateurs have reported dozens, these reports may be specious. As a rule, consider yourself lucky if you can see four. Then come back and try to improve on that number1.

At one point in Plato’s early history there was a dramatic shift of terrain when a large triangular massif, eight miles long, partially disconnected itself from the western rim and started to slide toward the floor. You can see this detached chunk even with small telescopes. And if you look around the rim a short distance to the north, you’ll see there was a similar event.

1 The largest of the four is 1.3 miles in diameter, the smallest is 1 mile.