The week of January 6-12 takes us from Day 11 to Day 17. This week we will highlight Mare Humorum, viewable for the whole week beginning on Monday evening. 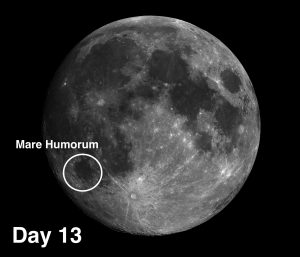 Mare Humorum: [SW/M6] The Humorum basin is one of the best examples of subsidence that you can see on the Moon. As the basin sank under the weight of its lavas, arcuate cracks, which can be easily observed in small telescopes, opened up on the east side around Hippalus and on the west side. The craters Doppelmayer, Lee, Hippalus, and Loewy tilted inward and their seaward rims sank beneath the lava flows which covered Mare Humorum. 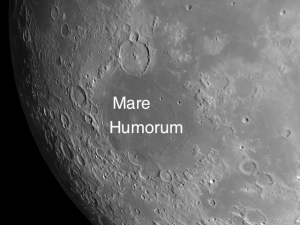 Tuesday is the 410th anniversary of one of the greatest scientific discoveries ever made, when Galileo took his new telescope (which he called his perspicil), trained it on Jupiter, and discovered that Jupiter had four moons. Up until that time the Church and the universities had insisted that the Earth was the center of all movement. Galileo’s discovery was proof that that was not the case, and got him into a lot of hot water (he was eventually tried for his “heretical” beliefs and sentenced to house arrest for the remainder of his life). I once saw a painting of Galileo standing on his balcony with his telescope pointed at Jupiter. There were four Cardinals of the Church with him, but they refused to so much as bend over and look through his telescope because they knew what they would find.

You can repeat Galileo’s discovery with even the smallest of telescopes (but you’ll have to wait a few months, as Jupiter is close to the Sun).