The week of January 13-19 takes us from Day 18 to Day 24. This week we will highlight Mare Nectaris and the crater Fracastorius, viewable late Monday night, and Rupes Altai (the Altai Scarp) viewable Tuesday evening.

Mare Nectaris: [SE/L13] The Nectaris basin was excavated 3.9 billion years ago. The oldest features on the Moon formed prior to this event. Mare Nectaris is a classic example of a multi-ring basin. Tuesday night will reveal the attendant Rupes Altai, a high cliff that is a conspicuous fragment of one of the original rings. As the Sun sets over the region, try to locate hints of other ring features surrounding Mare Nectaris.

Fracastorius: [SE/M13] Located on the south shore of Mare Nectaris, this is one of the Moon’s best examples of subsidence. The Nectaris lavas were so heavy that the floor of Fracastorius actually cracked as it bent downward and allowed the Nectaris lavas to flow over its northern rim. If you’re lucky and have good optics and good seeing, you might actually glimpse the unnamed rille that crosses the floor from east to west just south of the center. There is a tiny 2.5-mi. crater right in the middle of this rille that may help you spot it. (Daguerre on the north shore [L13] and its adjoining unnamed neighbor have both fallen victim to the same process of subsidence.)

There are some quite small objects on the floor of Fracastorius requiring high quality optics and steady seeing. How many of these can you detect? Make a quick sketch, then come back later to compare. 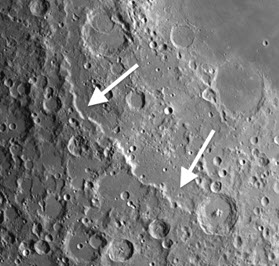 Altai Scarp (Rupes Altai): [SE/M12] Viewable even through small telescopes, the Altai Scarp is a spectacular example of how shock waves from a major impact can compress the surrounding terrain into a series of outwardly ex-panding rings. Nearly 3.9 billion years ago a large asteroid or comet slammed into the Moon and dug out the Nectaris Basin. Shock waves rapidly expanded through the surrounding terrain and became frozen in place, producing a classic multi-ring basin. Rupes Altai is a beautiful and conspicuous fragment of the original rings. In truth, it is a circular mountain range whose highest peaks rise to 13,000 feet! But you must catch the scarp under a low Sun, it’s majesty fades quickly. View it Tuesday evening, then revisit the area around Day 5 at lunar sunrise when the face of the scarp is fully illuminated. Which day, do you think, shows the scarp to its best advantage?