The week of April 9-15 takes us from Day 23 to New Moon. This week we will highlight the Milichius and Hortensius dome fields, visible at 5:00 a.m. on Tuesday morning.

Hortensius domes: [NW/J7] If you catch the terminator when it is about two-thirds of the way between Copernicus and Kepler (as it will be Tuesday morning) you should be able to explore two fascinating dome fields around the craters Hortensius (J7) and Milichius (H6). Domes are a type of shield volcano and, by their very nature, are illusive objects and difficult to spot. 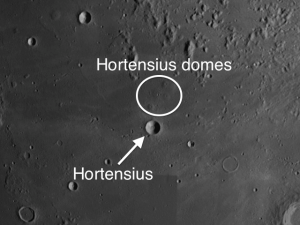 The easiest domes to find in this region are located east of Kepler, just north of the 9-mile crater Hortensius. Here you will find a rich field of six domes, five of which have summit pits at the top. These pits are around 1 mile in diameter, which means they will subtend an angle of roughly one arc-second. If the atmosphere cooperates, seeing them will be an interesting and worthwhile challenge for both observer and telescope. If you can see the domes themselves, then wait patiently for the atmosphere to settle to spot the summit pits. Can you see them with less than a 10″ instrument? 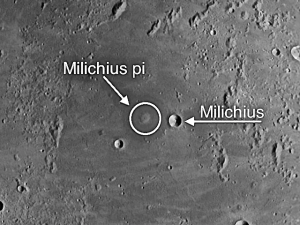 Milichius domes: NW/J7] After visiting the Hortensius dome field, turn your telescope slightly northwest to the crater Milichius (about 7 miles in diameter). To its immediate west you will find a few domes, chief of which is Milichius π (Pi), one of the more significant domes on the Moon. Milichius π is about 5 miles wide and has a summit crater a little over 1 mile in diameter. Because it is steeper than the average dome, it is a little more prominent and will cast a longer shadow. (At the average distance of the Moon the summit pit would be about 0.9 arc-seconds in diameter, so it will be a challenge but keep trying.)

About 60 miles north of Milichius π you will run into another dome field just south of the 20-mile crater T. Mayer [H7]. This entire area, from Hortensius to T. Mayer, is chock-a-block full of domes and will reward close scrutiny.