The week of February 15 – 21 takes us from lunar Day 8 through Day 14, almost the full moon. This week we will highlight the crater Plato.

Crater Plato on the Moon: One of the Moon’s Loveliest Sites

Plato: [NW/D9] Try to view Plato on Feb. 15 when the terminator is a little to its west, and you will witness one of the Moon’s loveliest sights. At such a time, the early morning Sun will be filtering through the mountain peaks and casting long spire-like shadows on Plato’s floor. 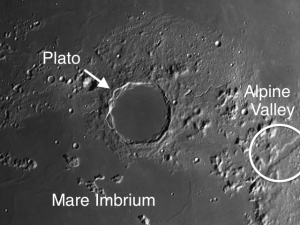 Within a short time it will look like the skyline of an entire city has been outlined on the interior plains of Plato. The process begins quite magically as small areas on Plato’s floor start to glow eerily. If you’re not prepared for it, you’ll be mystified by what is happening, but within a short time the outline of the eastern rim peaks will take shape and become apparent. If you’re lucky enough to catch this process at the beginning, come back every 15 minutes or so to watch the scene unfold.

There are a few instances where craters are seemingly complex, such as Plato, but they are lacking the requisite central peaks. So what happened? The peaks are still there; they are actually 1.2 miles high, but they’ve been entirely buried by torrential lava flows! Plato’s original floor is actually 1.5 miles deeper than it appears.

Crater Plato on the Moon: One of the Moon’s Loveliest Sites on Lunar Day 8
Tagged on: lunar dates    objects on the moon