During the first part of the week beginning Monday, Feb. 8, there is very little to observe on the Moon since new moon is on Monday. You must wait until Thursday night, the beginning of lunar day 4 of the lunar month, to start to see anything of interest. But Sunday night, Feb. 14, the Moon will be at first quarter and there is a veritable blizzard of exciting things to see!

On Thursday night, Feb. 11, the terminator, the dividing line between the light and dark sections of the Moon, will be at 43° E. Any feature within 10° or so of the terminator will have astonishing detail because of the contrast from long shadows (it is, after all, early sunrise on the Moon).

Messier: What’s Hot on the Moon Leading up to Valentine’s Day

• Messier: [SE/K14] One of my favorite objects on the Moon is a small pair of craters named Messier and Messier A. They are located on the western plains of the Sea of Fertility and can be easily seen through the smallest telescopes. The craters have a pair of splash rays that resemble the tails of a comet (an appropriate resemblance, considering who they are named after). These rays, which extend about 75 miles to the west, have a happy characteristic in that they are visible under lower angles of illumination. It is unusual to be able to see both a crater and the rays it produced at the same time. 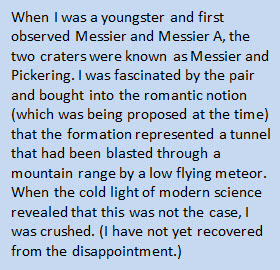 Sunday, Feb. 14, is Day 7 (first quarter) of the lunar cycle and if you’ve never seen the Moon through a telescope, it will be a jaw-dropping experience! Of particular interest is …

Alpine Valley: What’s Hot on the Moon Leading up to Valentine’s Day

• Alpine Valley: [NE/E10] This is one of the Moon’s major attractions. The valley is 120 miles long and 6 miles wide. When the Imbrium basin was formed 3.9 billion years ago, the resulting stresses produced two parallel fault lines in this area of the lunar Alps. The lines pulled apart and the terrain in between dropped away to produce this lovely valley. Try to catch it right after sunrise as the photogenic effect diminishes with a higher Sun angle. 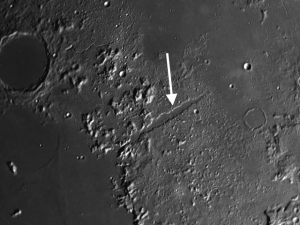 There is a challenging object running straight down the middle of the Alpine Valley, and you really should persist until you have seen it. A stream of hot lava had cut a tiny rille meandering down its middle. The rille is visible through a 5″ refractor (provided that you have excellent optics and great seeing). An 8-inch telescope will increase your chances considerably.

Of additional interest: Uranus will be 9° above the Moon on 2/11, magnitude 6.0, 3.4 arc-seconds in diameter, and the Andromeda galaxy, visible through the smallest binoculars, will not be far away.

It is highly recommended that you get a copy of Sky and Telescope’s Field Map of the Moon, the very finest Moon map available for use at the telescope.
It is available for $10.95 at www.skyandtelescope.com and on Amazon.
All features mentioned in this blog will be keyed to the grid on the Field Map and will look like this: Plato: [NW/D9]

Latest posts by Andrew Planck (see all)
Messier and Alpine Valley: What’s Hot on the Moon Leading up to Valentine’s Day
Tagged on: lunar dates    objects on the moon