The week of September 14-20 takes us from Lunar Day 27 to Day 4. This week we will highlight the craters Burckhardt and Aristarchus, viewable on Sat. and Sun. evenings. 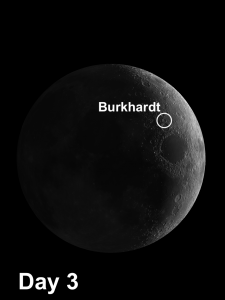 Burckhardt: [NE/F15] This is the crater with the “Mickey Mouse ears.” It is a remarkable exception to the rule that when one crater intrudes upon another, the younger crater (the intruder) is smaller. Burckhardt has landed smack in between two smaller but older 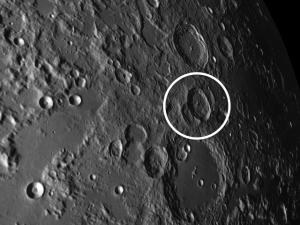 craters, giving it the Mickey Mouse effect—so we get a double whammy!

Aristarchus1: [NW/G5; L=47°W] The crater Aristarchus is the brightest spot on the Moon. It is so bright that Sir William Herschel2 mistook it for an erupting volcano, and its glow can even be seen coming through on the dark side of the Moon on Sat. & Sun. when it is illuminated only by earthshine. While you’re at it, see if you can spot segments of the Tycho ray system which are also visible under earthshine.

1 Aristarchus of Samos: (310-230 BCE) Greek astronomer who was the first person to teach that the Earth revolved around the Sun and rotated on its axis, hence he is frequently referred to as the “Greek Copernicus.” (Tragically, most of his writings went up in flames when the Great Library at Alexandria was burned.) For his belief that the Sun was at the center of the Solar System, it was suggested by Cleanthes the Stoic that he should be punished for impertinence to the gods. (It took a while, but the idea eventually caught on. Eighteen hundred years later the monk Giordano Bruno was burned at the stake in Rome for making similar suggestions. Bruno’s crimes included a diverse list of other so-called heresies, such as asserting the existence of other inhabited worlds and not believing in the Trinity, the divinity of Christ, or the virgin birth.)