The week of Feb. 6–12 takes us from Lunar Day 10 through Day 16. This week we will highlight the crater Bullialdus (a repeat from the Oct. 24th blog since Bullialdus was only visible during the early morning hours and few people were observing).

Bullialdus: [SW/M7] If you recall what Tycho looked like last night (and there may be enough features left tonight to remind you), Bullialdus shares much of the same morphology in spite of being only half the size: a compound central mountain, eye-catching terraces, a flat floor, a thick ejecta blanket, and material in the immediate environs that rained back down after impact. There are so many interesting features that it is surprising that Bullialdus gets such short shrift. It is the most conspicuous crater on Mare Nubium, an area that offers several conversation pieces. Examine the inner terraces for tiny impact craters and evidence of landslides. Can you make out an intriguing raised ridge running from the central mountains southeast to the base of the terraces on the wall? Over the next few nights, observe how the appearance of the central mountains changes substantially.

Look carefully at the shared terrain between Bullialdus and Bullialdus A immediately to its south. Other than the fact that Bullialdus A is smaller, can you see any evidence that tells you which crater is older?1

Bullialdus Causeway:2 [SW/M7] There is a wide, shallow valley that extends out from the west rim of Bullialdus and travels N.W. towards Lubiniezky. Toward the end of the valley (a little more than one crater diameter) you will run into two parallel lines, about 7 miles apart, running perpendicularly across the valley. These parallel lines are clearly depicted on the Field Map as a short arc and give the illusion of a causeway or a bridge that cuts across the valley at right angles. (You’ll need about 150x.) Whatever it is, it remains something of a mystery, and nobody has come up with an adequate explanation. 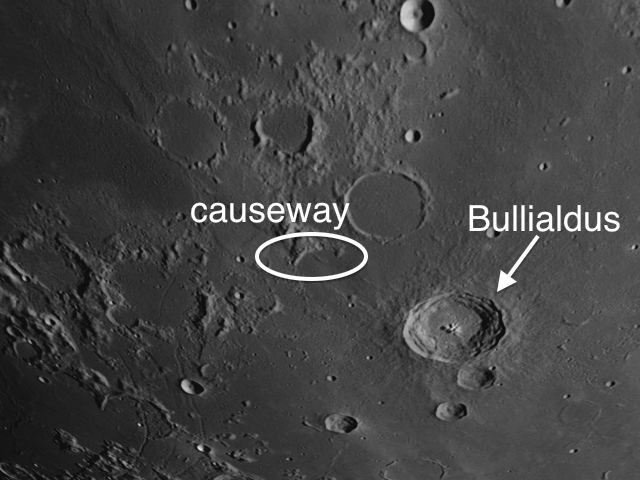 OF ADDITIONAL INTEREST ON THE MOON: THE WINTER HEXAGON and PENUMBRAL ECLIPSE

On Monday night the Moon will be in the middle of what’s called “the Winter Hexagon,” comprised of Sirius, Procyon, Pollux, Castor, Capella, Aldebaran, and Rigel.

On Friday there will be a penumbral eclipse of the Moon which will be in process for most of the United States at sunset. In the eastern U.S. it begins at sunset and ends at 9:53. For Denver, mid-eclipse is at 5:44 p.m., and those on the west coast can catch the tail-end. For them it ends at 6:55 p.m. However, penumbral eclipses don’t have the excitement and fanfare of total lunar eclipses because the resulting shading is only very slight and difficult to detect.

1Bullialdus A has landed within the already formed ramparts of Bullialdus, indicating that it’s younger. Also, the mere fact that it is smaller usually means it is younger.
2 A purely descriptive term as there is no official name for this feature.

Latest posts by Andrew Planck (see all)
Bullialdus: The Most Conspicuous Moon Crater and the Winter Hexagon
Tagged on: lunar dates    Mare Nubium    objects on the moon    penumbral eclipse of the moon    Winter Hexagon