I hope everybody had better luck with last Wednesday’s eclipse than I did in Boulder, Colorado. We had clouds in all the wrong places.

The week of February 5 – February 11 takes us from Day 20 to Day 26. This week we will highlight the area called the Southern Highlands, including the crater Stöfler, viewable early on Monday – Wednesday (try Stöfler on Tuesday & Wednesday). 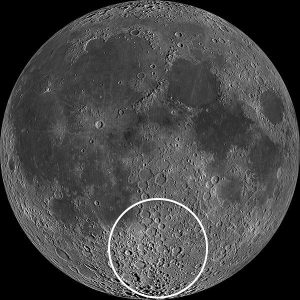 Southern Highlands: [SE ±K-R11] There is a veritable blizzard of craters in a large region known as the Southern Highlands (centered around K-R10). Dive into them, at your own risk, in the early morning Monday – Wednesday. A profitable exercise is to practice sorting craters out by age (Do they look fresh? Are the rims battered and worn down? Do craters overlap?) and by morphology (simple? complex? basin?)

Stöfler: [SE/P10] While you are swimming through the confusion of the Southern Highlands, try to find the crater Stöfler–it’s a treasure! (If you can find Maurolycus [SE/P11], then Stöfler is located immediately to its west.) There are three large craters lined up on the same latitude (Orontius, Stöfler, and Maurolycus) that reward examination. 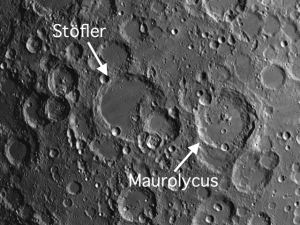 Some craters manifestly conform to the standard expectations–larger craters are older than smaller, younger craters intrude upon their elders. Stöfler is one of the best examples of this process. There is quite an impressive train wreck of craters on its southeast rim, all conforming to the rules–or almost all. Puzzle out the sequence for yourself before continuing with the next paragraph, and see if you can find the one exception.

Start with the smallest, youngest, and topmost crater on the southern rim of the “train wreck,” Faraday C. This crater substantially intrudes upon Faraday P to its immediate west, which lies atop the southwest rim of Faraday, the largest and most conspicuous intruder of Stöfler. (But can you see that Faraday actually cuts into an older ruined crater on Stöfler’s floor? It’s such a short fragment that it’s not possible to gauge its size.) If you look carefully, you can make out that Stöfler encroaches onto a smaller crater to its immediate southwest, which would make Stöfler both younger and larger. What do you think?