The week of January 29 – February 4 takes us from Day 13 through Day 19. This week we will highlight the total lunar eclipse of January 31st. 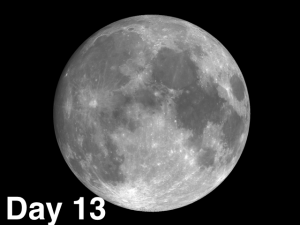 The Earth’s shadow will start to take a bite out of the Moon on Wednesday morning at 6:48 a.m. EST/3:48 a.m. PST, and the full eclipse will begin at 7:51 EST/4:51 PST. During the full eclipse the Earth’s atmosphere acts like a lens and will refract (i.e., bend) light onto the surface of what would otherwise be a dark Moon. As a result, you will see the red glow of every sunrise and sunset around the Earth eerily illuminating the surface of the Moon, hence the term “Blood Moon.”

A “Blue Moon” happens when there is a second full moon in the same month. This is a comparatively rare event (it happens once every 2.7 years–hence the phrase “once in a blue moon.”)

SuperMoons happen when a full Moon approximately coincides with the moon’s perigee, or the point in its orbit at which it is closest to Earth.1 This makes the moon appear up to 14 percent larger and 30 percent brighter than usual. If you watch the Moon just as it rises or sets then you can combine the standard illusion that the Moon is bigger with the fact that it actually is bigger!

This is the last of a trilogy of three SuperMoons in a row: Dec. 3rd, Jan. 1st, and Jan 31st. The last time there was a total eclipse during a “super blue blood moon” was 150 years ago, in 1866! So grab yourself a front row seat now and enjoy the show!

OF ADDITIONAL INTEREST IN SPACE THE WEEK OF JANUARY 29 – February 4th:

The White House is proposing reawakening America’s interest in Moon exploration by cutting back on space station funding and redirecting those funds towards returning to the Moon and creating human habitats. The international space station costs us more the $3 billion a year and this will be phased out by the end of 2024, if the proposal succeeds. Fingers crossed!

1 The Moon will come to perigee once a month, but the perigee distance can vary by up to 8,700 miles, so having a full moon coincide with its closest perigee is something that’s worth paying a little attention to. The term “SuperMoon” was actually coined by the astrologer Richard Nolle in 1979 to describe this event; however, the astronomical community prefers the official but cumbersome term “perigee-syzygy” (probably out of an understandable reluctance to admit that, once in a while, astrologers could get something right)–but “SuperMoon” is so much easier to say!