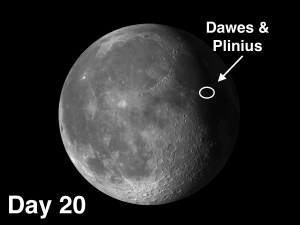 The week of August 7-13 takes us from Day 15 (full Moon) to Day 21. This week we will highlight the craters Dawes and Plinius, viewable on Friday evening (we visited these craters in the June 12th blog, but they were not viewable until 3:00 A.M. when few people were observing.)

Plinius: [NE/H12] Standing sentinel between Tranquillity and Serenity is the crater Plinius, a fine object with a sharp rim, terraces, an ejecta blanket, and a central projection which, depending on the illumination, has been described variously as a mountain, a double-mountain, central craters, or low mounds. How does it strike you? 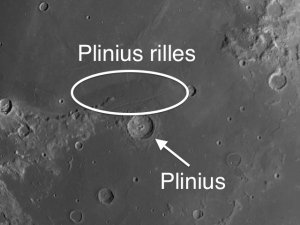 Immediately to the north of Plinius are three prominent rilles (Rimae Plinius), which follow along the edge of the Serenity basin. The lava that filled Serenity was so heavy that substantial cracks opened up near Plinius, and it also affected the craters Posidonius and le Monnier over 200 miles away (as described in the March 27, 2016 blog).

Although the lavas covering Serenity have a brighter hue, can you see that the lava plains of Mare Tranquillitatis are darker and older? The coloring becomes suddenly lighter just north of Plinius.

Discover What is Between Tranquillity and Serenity on the #Moon
Tagged on: lunar dates    lunar days    Mare Tranquillitatis    objects on the moon    Plinius    Serenity    Tranquillity