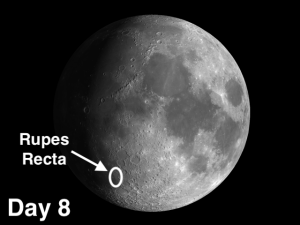 The week of April 23-29 takes us from Day 8 through Day 14. This week we will highlight the Rupes Recta (the Straight Wall), viewable on Monday night.

Straight Wall (Rupes Recta): [SW/M9; L=8°W] Two of the best-known faults on the Moon are Rupes Recta and Rupes Cauchy [Day 4]. They are fascinating to explore and they share remarkably similar neighborhoods: Both features are paralleled by a nearby rille, and in each case, an intervening small crater separates the rille and the fault. 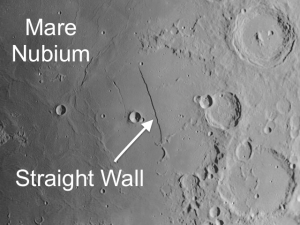 Straight Wall is the showpiece lunar fault line and can be seen clearly in the smallest telescopes. It is 70 miles long and 1,300 feet high. If you view it either in the early morning on Day 8, or at lunar sunset around Day 22, you will see clear evidence that Straight Wall is an enormous fault line where the terrain to its west has fallen away. In the morning, the rising sun casts a thick black shadow over the lava plain to the west. At sunset two weeks later, the exposed slope of the fault is brightly illuminated.

Lippershey: [SW/M8] While you’re in the neighborhood of Straight Wall, drop by and pay your respects to the simple crater Lippershey. As astronomers, we owe a lot to this crater’s namesake. Without him there would be no telescopes!1

1Lippershey, Hans: (1570-1619) A Dutch spectacle maker who is generally credited with having invented the telescope in 1608. (There is an apocryphal story that a small child, playing in Lippershey’s workshop, picked up two lenses, placed one before the other, was excited by what he saw and showed it to Lippershey.) Galileo got wind of the invention, made some improvements, turned it on the skies and launched the modern era of astronomy. (Although Galileo never overtly stated that he invented the telescope, he didn’t exactly rush to correct others who gave him credit for the instrument.)

Latest posts by Andrew Planck (see all)
Two of the Best Known Faults on the Moon
Tagged on: Hans Lippershey    lunar dates    lunar days    objects on the moon    telescope