The week of April 22-28 takes us from Day 18 to Day 24. This week we will highlight Rupes Cauchy, viewable early Tuesday morning. 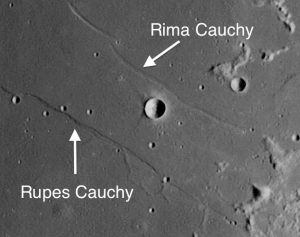 Rupes Cauchy1: [NE/J13; L=37°E] Two of the best-known faults on the Moon are Rupes Cauchy and Rupes Recta [Day 8; SW/M9]. They are fascinating to explore and they share remarkably similar neighborhoods: Both features are paralleled by a nearby rille, and in each case an intervening small crater separates the rille and the fault.

Seven miles northeast of Cauchy crater you will find Rima Cauchy, a rille that is 130 miles long, 2½ miles wide, and twists itself into a tight double u-turn halfway between Cauchy crater and the rille’s northwest end. To the southwest of Cauchy is the 75-mile Rupes Cauchy, an impressive fault that actually changes into a rille at both ends. The changeover point occurs coincidentally at two small craters that mark where the fault line starts to curve slightly to the southwest. Look carefully and see if you can detect the difference between a rima (a long groove) and a rupes (a cliff). This will be more obvious at lunar sunrise as the Moon’s surface is higher on the northeast side of the fault and a conspicuous shadow will be cast toward the west. On Tuesday morning the setting Sun brightly illuminates the westward-facing slope of the fault. Because these two features are radial to the Serenitatis Basin they are probably associated with stresses that resulted from the Serenity impact nearly 3.9 billion years ago.

1 rupes (Latin for scarp): a long cliff or steep slope that results from faulting or is part of a multi-ring fragment that resulted from a major impact that created one of the basins.