The week of March 14-20 takes us from Day 12 to Day 18. This week we will highlight the moon craters Endymion and Geminus which will be viewable on Saturday night around 11:00 P.M. 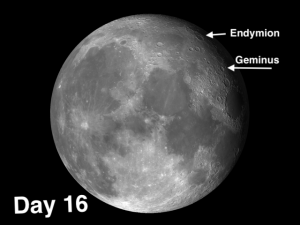 Endymion: [NE/D15; L=57°E] This is an older crater which somewhat resembles Plato [Day 8; NW/D9] in that it has a smooth, dark-chocolate floor and three-mile-high walls which cast lovely shadow spires on the flood plain below when the Sun is low, as will be the case on Saturday night. There is an extra treat: only 15 miles south-west of Endymion (about 13 arc-seconds) you might be able to spot a beautiful little concentric crater.

Geminus: [NE/F15; L=57°E] Roughly 200 miles north of Mare Crisium you will find the moderately complex 55-mile crater Geminus1. It has terraced walls and small central peaks. This will give you an indication of what to look for as moon craters become increasingly more complex.

The spring equinox (aka vernal equinox) will occur this week on Sunday, March 20. This is a time when the Sun, which has been moving steadily northward since the winter solstice, crosses the celestial equator, and night and day are of equal length (hence the term equinox, “equal night”) and spring begins.

There is a persistent belief that resurfaces once a year that on the vernal equinox it is possible to stand an egg on end. There is a good chance that you will see some news media reporting this and they will sometimes visit science classes in schools where students put this to the test. To everyone’s astonishment, some students are successful, thus proving that once a year mysterious forces come into play that are not completely understood.

However, if the news media were to revisit the same class a week or a month later they would discover roughly the same percentage of students would again be successful at standing an egg on its end. (This never happens because the event is believed to transpire only on March 20, and it never occurs to anybody to test it out on a different date.) The simple explanation is that the end of an egg has tiny bumps on it and with persistence a student will find three bumps that will serve as a type of mini-tripod that will hold the egg steady on its end.

1 200 miles would be about three arc-minutes north of Crisium. Being familiar with the field of view (FOV) of your eyepieces will help you navigate.