The week of July 10-16 Takes us from Day 16 to Day 22, starting essentially at full moon. This week we will highlight an unusual feature, O’Neill’s Bridge. It appears only when the lighting is perfect, so try for it both on Monday and Tuesday nights.

O’Neill’s Bridge: [NE/H15] There is a fascinating lesson here about how even trained scientists can allow their imaginations to run away with them. In 1953 amateur astronomer John O’Neill, using a 4″ refractor, reported having discovered a man-made bridge near the western shore of Mare Crisium. The bridge “had the amazing span of about 12 miles from pediment to pediment.” (The two “pediments” were the tip ends of Promentorium Lavinium and Promentorium Olivium.)1 O’Neill called for verification from professionals, and British astronomer Hugh Percy Wilkins corroborated that there was, indeed, such a bridge. American astronomers disputed the claim, saying that it was an illusion. But before the matter was settled, the news media prematurely announced the discovery of an artificial bridge on the Moon. (Not coincidentally, the 1950s were the peak of the “flying saucer” rage, so the public was ripe!) Wilkins was blamed for the resulting media circus and was forced to resign from the British Astronomical Association. 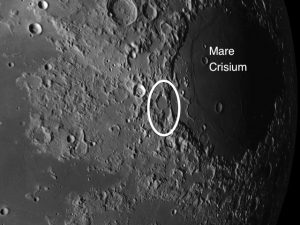 Now put yourself to the test! Tonight near the southwest shore of Mare Crisium you will find the ghost crater Yerkes. Immediately west of Yerkes are two promontories forming the shoreline of Crisium. When the Sun is at the right angle, the lighting will create the illusion of a bridge spanning the two promontories. Could you be convinced, in a more gullible climate, that you were staring at a man-made bridge? (Wilkins was using a 15″ Newtonian at 300x.) The best time to view the bridge is around Day 17 when the terminator is near 53° and the two promontories are just lit up by the setting Sun.2 If you don’t see it Monday or Tuesday nights, come back later and keep trying. The lighting has to be perfect.

1 These two promontories are not listed on the Field Map, but they are located on the WSW shore of Crisium.

An Unusual Feature on the #Moon: O’Neill’s Bridge
Tagged on: artificial bridge on the moon    lunar dates    lunar days    objects on the moon