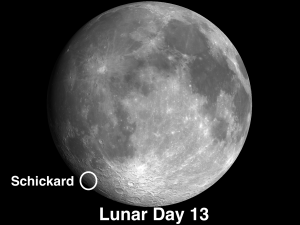 The week of January 9-15 takes us from Lunar Day 12 through Day 18, centering on the full moon. This week we will highlight the crater Schickard on Tuesday evening.

[SW/P4] When you look at Schickard, you should immediately notice something unusual: Schickard’s floor has stripes! It is dark on both the north and south ends, but there is a wide central stripe of lighter material. You are looking at terrain that is made up of two different chemical compositions and is a result of a combination of lighter highland material that was blown in from the formation of the Mare Orientale basin and dark basaltic material (molten lava that welled up from underneath) on the northern and southern portions of Schickard.

OF ADDITIONAL INTEREST AFTER THE MOON CRATER SCHICKARD: Castor and Pollux – Two Bright Stars in Gemini

The Moon is so bright that it washes out all but the brightest telescopic objects. Take advantage of the fact that the Moon is in the constellation Gemini and point your telescope to the double star Castor. Its components are mags +1.6 and +3.0 and are separated by 5.2 arc-seconds.

Castor and Pollux are the two bright stars at the head of Gemini. According to Roman mythology they were inseparable brothers, and when Castor was killed in battle Pollux was so grieved that he prayed to Zeus that he might die so that he could be with his brother. Zeus granted his wish and placed them both in the heavens. Later, Roman soldiers swore an oath of fidelity by this constellation, saying “By Gemini, I swear to be true.” Today when you hear an old timer exclaiming the mild oath “by jiminy!,” he is uttering a phrase, in a slightly altered form, that can be traced all the way back to the days of ancient Rome.