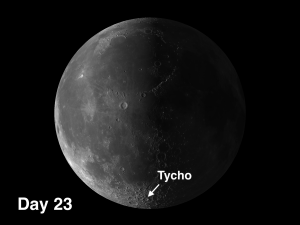 The week of May 7-13 takes us from Day 22 to Day 28, two days before New Moon. This week we will highlight the crater Tycho, visible around 3:00 a.m. on Tuesday morning. 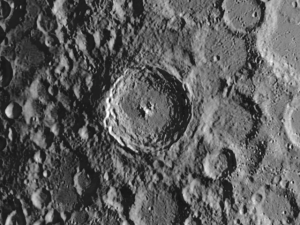 Tycho1: [SW/P8; L=11°W] Tycho is one of the Moon’s showpieces, both on Tuesday morning and around full Moon when its system of rays becomes the dominant feature on the Moon. Early on Tuesday morning we get to see Tycho strutting about as the prototype of complex craters (which have terraced walls, central mountain peaks, flat floors, and ejecta blankets). The mountains around Tycho’s rim, at their greatest height, soar almost 3 miles above its floor! Tycho is at the northern tip of a diamond formation of large and significant craters that include Maginus, Longomontanus, and Clavius. At a mere 109 million years, Tycho is also the youngest major crater on the Moon. (Notwithstanding its youth, dinosaurs were roaming the Earth when it was created!) 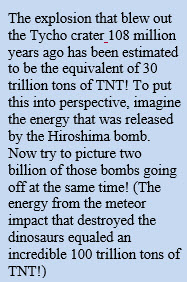 When the asteroid that made Tycho hit, it would have been a spectacular sight. The dinosaurs had a front row seat to the event and would have been pelted for weeks with debris that had been blasted out of the site and made it all the way to Earth!

Much of the material that was blown out of the crater was instantly liquefied. It then rained back down on the site and produced a veneer of impact melt that pooled smoothly on the eastern portion of the floor.

Compare Tycho to Bullialdus, a little bit farther west [M7]. Bullialdus, with its terraced walls, central peaks, and flat floor mimics the Tycho morphology more closely than any other crater in the southwest quadrant of the Moon.

OF ADDITIONAL INTEREST:
Jupiter will be at opposition on Tuesday night, meaning it is directly opposite from the Sun and reasonably high in the sky, a good time for viewing!

1 Brahe, Tycho: (1546-1601) Brilliant (albeit eccentric) Danish astronomer who had a passion for understanding how the stars and planets moved. He tirelessly recorded their positions with great precision and without the benefit of a telescope. (It is said that he could resolve an angular separation as small as 6/10 of an arc-minute with his naked eyes. A normal person with good eyesight can resolve between 1 and 4 arc-minutes.)

In November of 1572, Brahe extensively reported on the discovery (not his own) of a bright new star–what today we call a supernova. “Tycho’s Star,” as it came to be known, caused quite a stir because its sudden appearance meant that the heavens were not immutable and perfect after all–such was the belief introduced by Aristotle and insisted on by the Church. But because the prevailing religion in Denmark was Lutheranism, Brahe suffered no repercussions.

Arguably, next to his meticulous calculations, the greatest thing Brahe did was to bequeath his logbooks to Johannes Kepler, his assistant. After studying Brahe’s fastidious entries on the positions of Mars, Kepler made the crucial discovery that planets moved in ellipses, not perfect circles. From that point on, the movement of the planets became much more predictable. (Although Mercury remained a mystery until Einstein came along and proved that planets were contained in their orbits not because of gravity but because space is curved!)