The week of April 11-17 takes us from lunar Day 5 through Day 11. This is one of the best windows to do viewing of the Moon! Close to the terminator it is sunrise on the Moon and because of the long shadows there is a myriad of objects that are set off with astonishing detail! This week we will highlight the finest trio of craters on the Moon: Theophilus, Cyrillus, Catharina, visible on 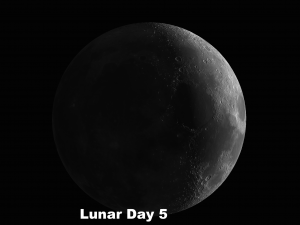 • Theophilus, Cyrillus, Catharina: [SE/L12] This is the most imposing trio of craters on the Moon. They are located just west of Mare Nectaris and have their own distinct personalities. 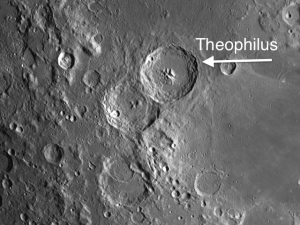 Theophilus is a spectacular formation with all of the attendant complexities of a Tycho-class crater: terraced walls, a flat floor, and magnificent central mountain peaks. It is 60 miles in diameter, and the drop from the highest mountains on the rim to the floor below is a breathtaking 2.7 miles! Observers have reported that the shape of the central mountain seems to change as the lunation progresses. Observe it over the next few nights and see if you can notice any differences in the shape of the central mountain. 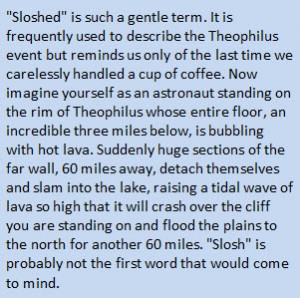 Can you figure out the comparative ages of the three craters?2

OF ADDITIONAL INTEREST TO VIEW IN THE SKY ON LUNAR DAY 5 – 11 :
Jupiter will be high in the sky all week. Even with small telescopes you can see its moons and the cloud bands. If you wait until about 9:15 PM, when it is fully dark, there is a nice trio of galaxies just 6° NNE of Jupiter. I call it the Wolf’s Head Trio because it resembles two eyes and a snout. They consist of M65, M66, and NGC3628. All three galaxies will fit in the field of view of a low power eyepiece. Go two Telrad-widths NNE of Jupiter and the trio should be in the center of the Telrad. Put in a low power eyepiece and scan the area.

2Theophilus is younger than Cyrillus because it intrudes upon the latter’s rim. Catharina seems to be the oldest because there are five craters superimposed on it, and two elongated craters on its northeast rim point back toward Mare Imbrium, suggesting that Catharina is even older than Imbrium!

The Most Imposing Trio of Craters on the Moon: Theophilus, Cyrillus, Catharina
Tagged on: lunar dates    objects on the moon