The week of October 19-25 takes us from Lunar Day 4 to Day 10. This week we will highlight the craters Peirce and Picard, viewable starting Monday evening. 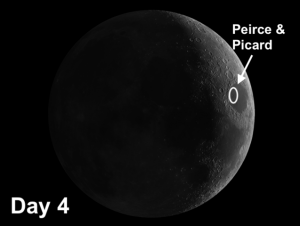 Peirce & Picard: [NE/H15] The two largest intact craters on Mare Crisium are Peirce and Picard. They are only about 12 miles in diameter by 1 mile deep and will require 75x – 100x to see them. They are located on a more-or-less north-south line about 30 miles in from the western shore of Crisium (Peirce is the northernmost). The lava that covered Crisium stopped flowing before these craters formed. You should easily be able to spot Swift, a small seven-mile crater just eight miles to the north of Peirce.

The Orionid meteor shower peaks on the morning of Oct. 21st. On Oct. 22, 2136 BC, the first recorded solar eclipse happened in China. (In 2000 BC there was another solar eclipse in China and because the court astronomers, Hsi and Ho, failed to predict it, they lost their heads. According to legend their heads were swung around by their pigtails and flung up into the heavens where we see them today as the Double Cluster in the constellation Perseus.