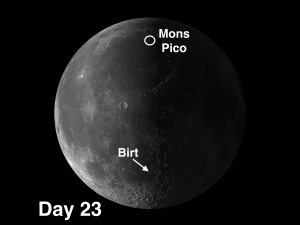 The week of Jan. 8-14 takes us from the end of Day 22 (waning crescent) to Day 27. On Monday the Moon won’t be high enough to view until 2:00 a.m. This week we will highlight Mons Pico and the crater Birt, viewable early Tuesday morning.

Mons Pico: [NW/E9] As the terminator is approaching Plato early Tuesday morning, the redundantly named Mount Pico1 and its little brother Pico &U0392; (Beta), about 25 miles to its south, are striking, statuesque features which stand sentinel on the lava plains of Mare Imbrium. The “Brothers Pico” are surviving 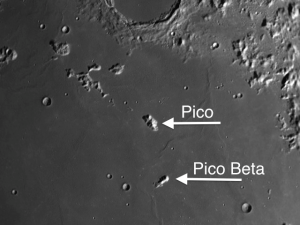 fragments of what was at one time the magnificent inner ring of the Imbrium basin, which was created 3.9 billion years ago when an asteroid 60 miles in diameter slammed into the Moon at 10 miles per second and blasted out a 720-mile-wide crater! Mount Pico towers an impressive 1.5 miles over the plains below!

Birt: [SW/M9] Just to the west of Straight Wall, a showcase feature which was discussed in a previous blog, you will find the small 10-mile crater Birt. Like Aristarchus (Day 11), Birt has interior bands running up its wall, although they are not as prominent. At 10 miles in diameter, Birt is pretty small, so the bands may not be immediately obvious.

1“Pico” is Spanish for peak.

One thought on “The “Brothers Pico” and Birt”