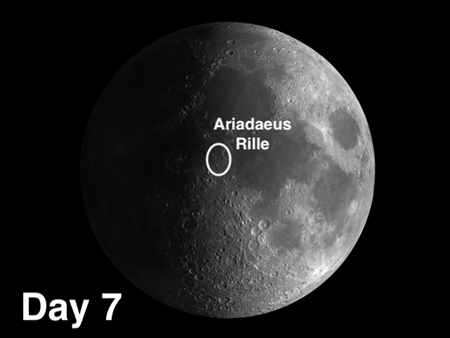 The week of December 21-27 takes us from Lunar Day 7 to Day 13. This week we will highlight Rima Ariadaeus, viewable on Monday evening.

Rima Ariadaeus: [NE/J11] The best place to see rilles on the Moon is in the area just west of Tranquillity. Here you will find a remarkably varied collection–to wit, Ariadaeus, Hyginus (two of the best-known rilles on the Moon) and Triesnecker. All three should be visible Monday night. 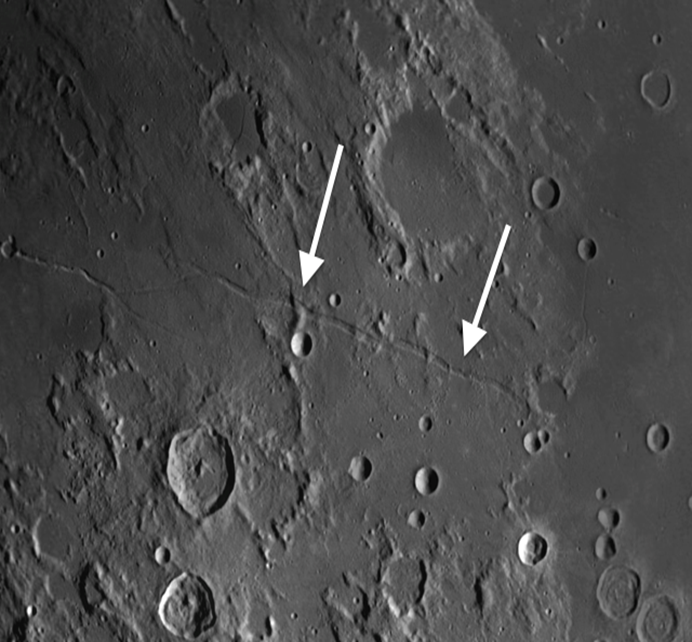 When the terminator is close, Rima Ariadaeus is an enjoyable target even for small telescopes. It is a classic example of a graben, an elongated depression between two parallel fault lines where the ground in between has fallen away.1 If you have at least a 4″ telescope with good optics and steady seeing you will just be able to make out that the fault lines have pulled apart and the ground in between has sunk. (This is a challenge; Ariadaeus is a shade over two arc-seconds wide.) The rille appears to be broken in a few places, indicating that the lunar terrain has shifted since it was created, and there is a shunt on its western end connecting it to Rima Hyginus.

On December 21st, Jupiter & Saturn will be the closest they have ever been in 397 years, an event called “the Great Conjunction.” At that time they will be only 0.1 degrees apart. You should be able to see both of them in the field of view of most telescopes. Look for them in the south-west shortly after sunset. The brighter one is Jupiter. Coincidentally, December 21st is the Winter Solstice, the official beginning of winter and the shortest day of the year.

The Ursid meteor shower will peak on December 22. Look for it after midnight.

1 There is an astonishing Apollo 10 photo of the Ariadaeus rille at www.skyimage.com. Click on Search, type in “Ariadaeus,” then click on the image twice to enlarge it.

Rima Ariadaeus: Classic Example of a Graben on the Moon