The week of June 13-19 takes us from Day 14 to Day 20. This week we will highlight the feature known as Promontorium Agarum on Mare Crisium, viewable in the early morning hours of Wednesday, June 15. 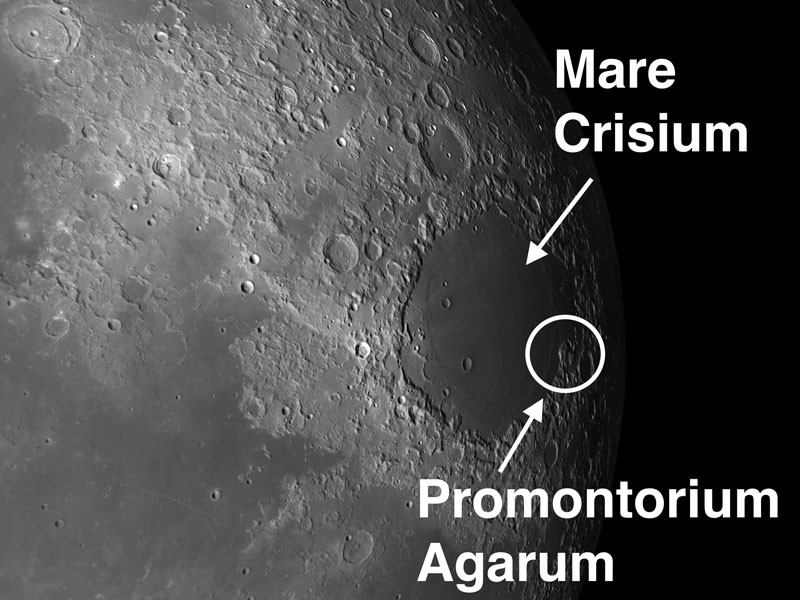 Promontorium Agarum: [NE/H16; L=66°E] an impressive cape on the S.E. edge of Crisium. It has peaks that tower several thousand feet above its floor. LTP’s 1 have occasionally been reported in this region, especially right after sunrise.

Tuesday is the first supermoon of 2022. A supermoon is a full moon that nearly coincides with perigee – the closest that the Moon comes to the Earth in its elliptical orbit – resulting in a slightly larger-than-usual apparent size of the lunar disk.

1lunar transient phenomenon (LTP): A lunar transient phenomenon is a short-lived change in the appearance of the lunar surface. LTP’s are usually variations in lighting (either sudden or gradual) or color. They often manifest themselves as obscurations, foggy patches, etc. Enough LTP reports have been made by reputable individuals that scientists have reluctantly conceded that such things do occur.