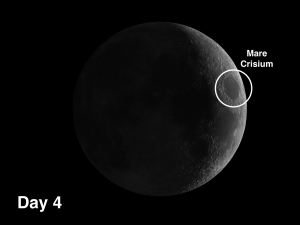 The week of October 28 – November 3 takes us from Day 1 to Day 7. This week we will highlight Mare Crisium, viewable on Thursday evening. 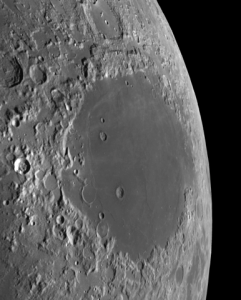 Mare Crisium: [NE/H15] On Day 4 the Sea of Crises, the first of the large seas to become visible on the waxing Moon, has now been fully revealed. We tend to think of craters as comparatively small objects and lose sight of the fact that large lunar “seas” are the result of crater impacts also. Basically, if it’s round, it’s a crater. Mare Crisium resulted from the impact of a large meteor 3.9 billion years ago. The event was energetic enough to leave a multi-ring imprint, parts of which we can clearly see. Notice the ring features bending around Crisium on its north side. Particularly notice how Mare Anguis on the N.E. side of Crisium [G16] extends itself toward the west, passes below Cleomedes, and then dissipates at Tisserand. The Crisium basin appears elliptical, with its long axis running from north to south. This is an illusion due to the effects of foreshortening. Crisium actually is elliptical, but, contrary to what your eyes tell you, its long axis runs east to west. 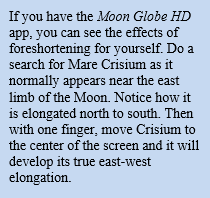 Take a mental image of how much space there is between Mare Crisium and the eastern rim of the lunar disk. This will vary from month to month, even from night to night, and will be an indicator of how much libration has come into play.

Once you have become familiar with the details on the surface of Mare Crisium, be on the lookout for LTP’s, particularly around Promontorium Agarum on the ESE rim of the mare. These have been reported from time to time and manifest themselves as mists that mysteriously appear and obscure some of the surrounding details.

OF ADDITIONAL INTEREST:
Standard Time resumes at 2:00 a.m. on Sunday morning.
If you’re observing the Moon by 6:30 p.m. on Thursday, you can catch Mercury, Venus, Jupiter, Saturn, Uranus, Neptune, and Pluto in the sky at the same time.