The week of June 22-28 takes us from Lunar Day 2 to Day 8. This week we will highlight the crater Messier, viewable on Wednesday evening. 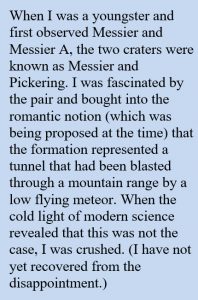 Messier1: [SE/K14] One of my favorite objects on the Moon is a small pair of craters named Messier and Messier A. They are located on the western lava plains of the Sea of Fertility and can be easily seen through the smallest telescopes. The craters have a pair of splash rays that resemble the tails of a comet (an appropriate resemblance, considering who they are named after). 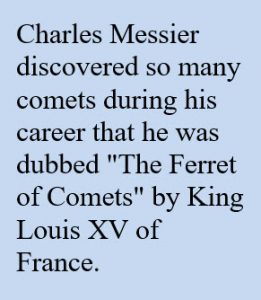 These rays, which extend about 75 miles to the west, have a happy characteristic in that they are visible under lower angles of illumination. It is unusual to be able to see both a crater and the rays it produced at the same time. (Tycho [SW/P8] is the most conspicuous example of splash rays.)

1Messier, Charles: (1730-1817) There is virtually no other figure in the pantheon of famous scientists who is more significant to amateur astronomers than Charles Messier. Messier’s most important function, as he saw it, was to hunt down comets. It was his greatest passion, but he was frequently frustrated in his efforts because he kept stumbling across faint fuzzy objects that looked like comets but proved to be nebulas or galaxies. The only way to tell the difference was to come back days later and look at it again. If it had moved, it was a comet.