The week of February 10-16 takes us from Lunar Day 17 (one day after full moon) to Day 22. This week we will highlight the craters Cleomedes and Proclus, viewable on Monday evening. 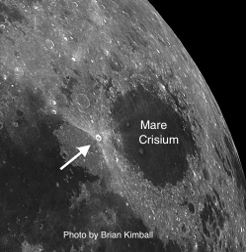 Proclus: [NE/H14] Proclus is a small crater located just west of Mare Crisium. In spite of its size, it is one of the brightest spots on the Moon. When you view it around the full Moon, you will notice it also has a system of rays that delicately fan out in a telltale butterfly-wing pattern, which tells you a lot about the flight path of the incoming projectile. Proclus is one of the best examples of what happens during a low-angle impact.

On Monday Mercury will be at its greatest elongation from the Sun and at magnitude -0.4. Try for it after sunset (binoculars may help). It is said that the great Copernicus himself never saw Mercury.