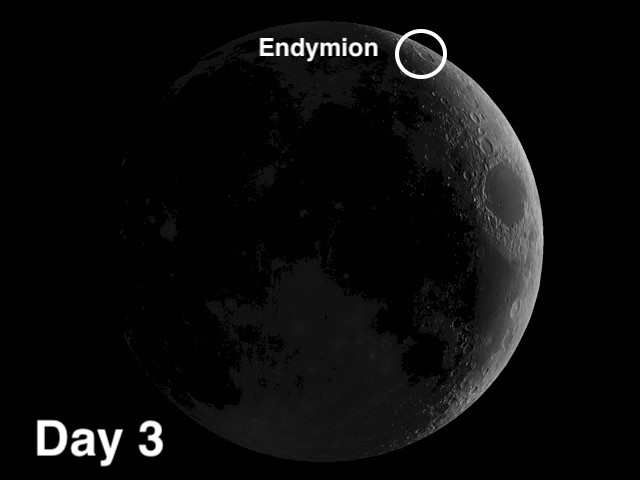 The week of April 20-26 takes us from Lunar Day 27 to Day 3. This week we will highlight the craters Endymion and Aristarchus, viewable on Sunday evening.

One of the loveliest views of the Moon can be seen around Day 3, and to appreciate it you don’t even need a telescope. Go out on Sunday evening, just as deep twilight is ending, and look west. The Moon will seem magically suspended over the horizon, and its dark side will be softly glowing from earthshine (a monthly phenomenon known as “the old moon in the new moon’s arms”). At such times the daylight portion of the Earth shines a beacon of reflected sunlight toward the Moon whose dark side acquires a lovely ethereal glow. We perceive this glow as earthshine. Spring is an especially good time to enjoy this sight. It is particularly lovely when Venus is suspended just next to the Moon (as will be the case on Sunday evening), and if you can possibly add the aroma of nearby apple blossoms then you will have created a scene of transcendental beauty. It is a time for poets and lovers.

Aristarchus: [NW/G5] Aristarchus* is the brightest spot on the Moon, a phenomenon that you can observe Sunday evening on Day 3, in spite of the fact that Notice that Aristarchus is on the dark portion of the Moon! It is so bright that Sir William Herschel mistook it for an erupting volcano.

*Aristarchus of Samos: (310-230 BCE) Greek astronomer who was the first person to teach that the Earth revolved around the Sun and rotated on its axis, hence he is frequently referred to as the “Greek Copernicus.” (Tragically, most of his writings went up in flames when the Great Library at Alexandria was burned.) For his belief that the Sun was at the center of the Solar System, it was suggested by Cleanthes the Stoic that he should be punished for impertinence to the gods. (It took a while, but the idea eventually caught on. Eighteen hundred years later the monk Giordano Bruno was burned at the stake in Rome for making similar suggestions. Bruno’s crimes included a diverse list of other so-called heresies, such as asserting the existenece of other inhabited worlds and not believing in the Trinity, the divinity of Christ, or the virgin birth.) 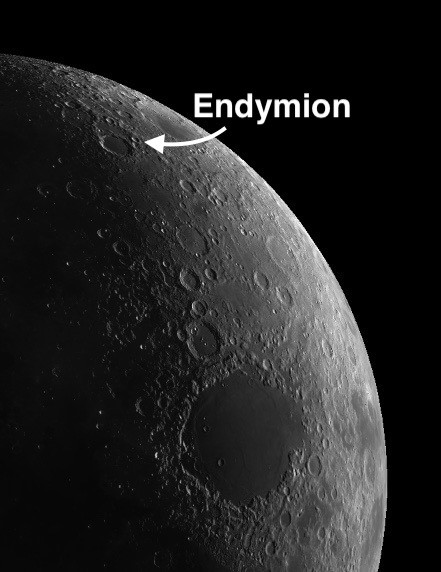 Endymion: [NE/D15] This is an older crater which somewhat resembles Plato [Day 8; NW/D9] in that it has a smooth, dark-chocolate floor and three-mile-high walls which cast lovely shadow spires on the flood plain below when the Sun is low. And there is an extra treat: 15 miles south-west of Endymion (about 13 arc-seconds) you might be able to spot a beautiful little concentric crater.