The week of June 18 – 24 takes us from the end of Day 6 to the end of Day 11. This week we will highlight the crater Regiomontanus, viewable on Thursday evening. 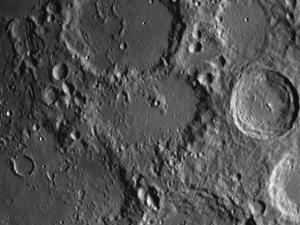 Regiomontanus: [SW/M9] This is a crater that just exudes character and personality! It has a squashed, oblong shape that looks as if it’s being squeezed out from a tight place between Purbach to its north and Deslandres toward the southwest (this is an important clue about which crater has seniority in the region.)1 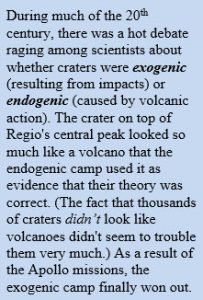 Despite its high state of disintegration, Regiomontanus retains many interesting features. It has a group of “central” mountains that seem to have wandered off-target (a result of the forces which turned it from a round crater into a squashed, oblong thing). There are eroded walls, complex ramparts, and a floor that is dotted with tiny craters. But there is something about its central mountain that is surprising. Look closely under high power and good seeing conditions and you might be able to see that a small meteor has impacted precisely on the tip of its highest peak and left a tiny 3½-mile craterlet in its place. Somebody must have been taking really good aim!

1 Regio is obviously older. Because it was in place first, when the other two interlopers arrived later they distorted its circular shape.