The week of July 15-21 takes us from the end of Day 13 (nearly full moon) to Day 19. This week we will highlight the crater Pythagoras, viewable on Monday evening. 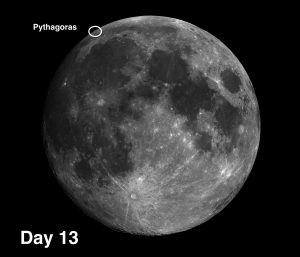 Pythagoras: [NW/C3] There is only a brief period during each lunation when Pythagoras is visible. It is a complex crater with two central mountain peaks, terraced walls, and internal features. It is an impressive 80 miles in diameter (compare to Copernicus at 58 miles.) Its spectacular rim mountains rise to an imposing three miles above its floor!1 The central mountain peaks alone attain a height of one mile. Although it is close to the northwest limb and is substantially foreshortened, it is 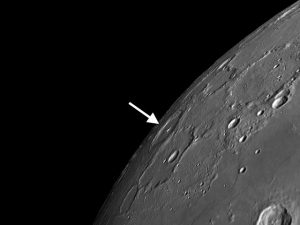 worth a visit. Try to catch it when the libration is favorable, as it will be on Monday night.

OF ADDITIONAL INTEREST ABOUT THE MOON:

Saturday night, July 20th, marks the 50th anniversary of our landing on the Moon. Take a moment to reflect on what a remarkable achievement this was. But an incredible 20% of Americans actually believe that the moon landing was a hoax! They are convinced that the hoax was perpetrated by the U.S. Government to assert our victory over Russia in the space race.

1To put this into perspective, these peaks would soar 7,000 feet higher than Colorado’s 14ers!