The week of April 25 – May 1st takes us from Day 25 to Day 1. This week we will highlight the moon crater Kepler, viewable before sunrise on Tuesday. 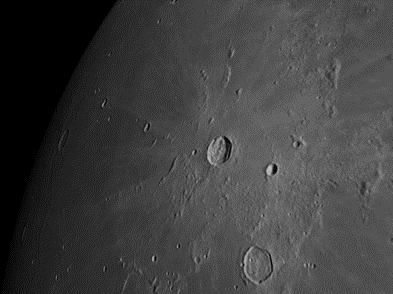 Kepler1: [NW/J6; L=38°W] Kepler is a substantial 20-mile crater with terraced walls and some disappointingly feeble hills in place of a central mountain peak. There is a peculiar straight gash just in from the east rim which forms a long straight valley. Revisit Kepler at full Moon to appreciate how its rays intertwine with those of Copernicus and Aristarchus.

1 Kepler, Johannes: (1571-1630) German astronomer, mathematician, and astrologer who made the enormously important discovery that planets move in elliptical orbits, not perfect circles. His Three Laws of Planetary Motion finally allowed astronomers to calculate the position of planets with much greater precision. (However, Mercury continued to avoid being pinned down. It took Einstein to make the far-reaching discovery that planets do not precisely obey Newton’s laws of gravity because gravity, as it was classically understood, did not exist. Planets are locked into their orbits, not because of gravity, but because space itself is curved!)

An interesting piece of trivia about Kepler is that personal hygiene was not high on his list of priorities. At one point, he noted in his diary that as a result of his wife’s constant pesterings he finally agreed to take a bath. The result? He found the experience “unpleasant.”

One thought on “Moon Crater Kepler: Rays Intertwine with Copernicus and Aristarchus”