The week of April 8-14 takes us from Day 3 to Day 9. This week we will highlight the crater Gutenberg, viewable on Monday and Tuesday evenings. 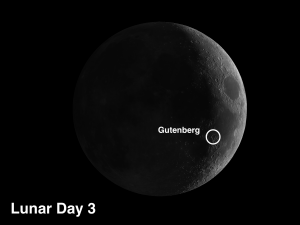 Gutenberg: [SE/K14] On Monday and Tuesday night, you check out the western edge of the Sea of Fertility (Mare Fecunditatis) and pay your respects to one of history’s great men. 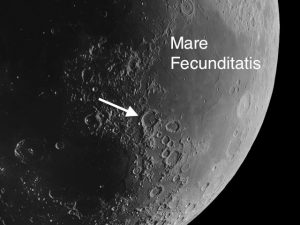 Gutenberg crater is not only of historical importance because of its namesake1, it also shows an unusual sequence of crater development. Gutenberg is a large crater (45 mi. in diameter) that is intruded upon by a smaller crater (12 mi. in diameter–Gutenberg E) on its eastern wall. So far so good. But take a close look at the crater immediately adjoining it to the south (Gutenberg C). These craters have violated the usually dependable rule that newer craters are smaller than the older craters they have intruded upon. Gutenberg C is the older crater, while the larger Gutenberg is the interloper.

Another item of interest is the simple crater on the southwest rim (Gutenberg A). Simple craters start with rounded floors, then progress to a flat floor resulting from a cascade of boulders that have rolled down the interior walls and settled at the bottom. Rim shadows on bowl-shaped floors will appear as a smooth arc. If the floor is flat because it has been partially filled in, the shadow will be truncated (i.e. the apex will be squared off). Can you tell if the floor of Gutenberg A is bowl-shaped or flat?

1 Gutenberg, Johannes: (1398-1468) Gutenberg invented the printing press in 1438 and revolutionized the world. Before Gutenberg it would take a single monk 20 years to copy the Bible, and there were only 30,000 handwritten Bibles in the entire world. Fifty years after Gutenberg there were more than 10 million Bibles in print!

One thought on “Moon Crater Gutenberg and its Historical Significance”