The week of April 12-18 takes us from Lunar Day 1 to Day 6.
This week we will highlight the crater Dawes and the Altai Scarp, viewable on Saturday evening. 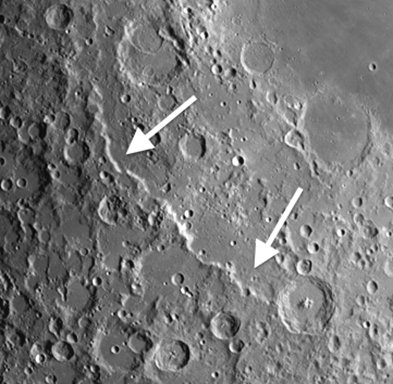 Altai Scarp (Rupes Altai): [SE/M12] Viewable even through small telescopes, the Altai Scarp is a spectacular example of how shock waves from a major impact can compress the surrounding terrain into a series of outwardly expanding rings. Nearly 3.9 billion years ago a large asteroid or comet slammed into the Moon and dug out the Nectaris Basin. Shock waves rapidly expanded through the surrounding terrain and became frozen in place, producing a classic multi-ring basin. Rupes Altai is a beautiful and conspicuous fragment of the original rings. In truth, it is a circular mountain range whose highest peaks rise to 13,000 feet! But you must catch the scarp under an early morning Sun, it’s majesty fades quickly. View it on Saturday or Sunday night when the face of the scarp is fully illuminated, then revisit the area around Day 19 or 20 at lunar sunset. At this time the scarp sends long shadows over the terrain to the east. Which day shows the scarp to its best advantage?

As daylight moves across the region, try to locate hints of other ring features surrounding Mare Nectaris.

CORRECTION: On the March 29th Blog the image of the Great Eastern Chain had the crater Vendelinus misspelled as Vandelinus, although the accompanying text had it spelled correctly.

1 Of Dawes Limit fame. Dawes Limit: The Dawes Limit is the closest separation of a double star that can be observed for a particular telescope. The formula is S=4.56/D (S = separation in arc-seconds, D is the diameter of the objective lens or mirror in inches). For example, if your telescope has an 8″ mirror, then S = 4.56/8 = 0.57 arc-seconds.

“Closest separation” here means that you can barely detect a “figure 8” bulge starting to emerge in the pattern of the two overlapping discs of a double star. A more realistic and esthetically pleasing criterion is the Rayleigh Limit, which occurs when the discs of two stars are separated by a thin black space in between the two stars. The formula for the Rayleigh limit is S = 5.35/D where D is the aperture in inches. So in the above example of an 8-inch telescope, you would expect to see two stars that are separated by 0.67 arc-seconds cleanly split by a thin black space.