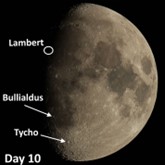 The week of October 3-9 takes us from Lunar Day 7 to Full Moon. This week we will highlight the moon crater Bullialdus and the ghost crater Lambert-R, immediately above the crater Lambert, both viewable on Tuesday evening.

Bullialdus: [SW/M7] If you look at Tycho to its south, Bullialdus shares much of the same morphology in spite of being only half the size: a compound central mountain, eye-catching terraces, a flat floor, a thick ejecta blanket, and material in the immediate environs that rained back down after impact. There are so many interesting features that it is surprising that Bullialdus gets such short shrift. It is the most conspicuous crater on Mare Nubium, an area that offers several conversation pieces. Examine the inner terraces for tiny impact craters and evidence of landslides. Can you make out an intriguing raised ridge running from the central mountains southeast to the base of the terraces on the wall? Over the next few nights, observe how the appearance of the central mountains changes substantially.

Look carefully at the shared terrain between Bullialdus and Bullialdus-A immediately to its south. Other than the fact that Bullialdus-A is smaller, can you see any evidence that tells you which crater is older1 ?

Lambert-R: [NW/G7] Immediately south of the crater Lambert you will see what is called a “ghost crater”–a circular wrinkle ridge formation indicating an underlying crater that had been completely inundated by the Imbrium lava flows. As the lava cooled, it shrank and the outline of the original crater rim percolated to the top, leaving a ghostly imprint of the original crater.